Preparing Your Heart for Worship 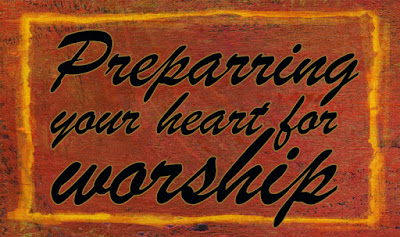 Before the worship service can begin the necessary preparations must occur


27 At the dedication of the wall of Jerusalem, the Levites were sought out from where they lived and were brought to Jerusalem to celebrate joyfully the dedication with songs of thanksgiving and with the music of cymbals, harps and lyres. 28 The musicians also were brought together from the region around Jerusalem—from the villages of the Netophathites, 29 from Beth Gilgal, and from the area of Geba and Azmaveth, for the musicians had built villages for themselves around Jerusalem. 30 When the priests and Levites had purified themselves ceremonially, they purified the people, the gates and the wall. Nehemiah 12:27-30

The text never tells us how long after the completion of the wall this dedication took place, but we can assume it was very soon. The worship for this service was extremely important, so important that Levites were sought out to celebrate. The Levites were the ones who performed all the various functions revolving around God’s Temple and its worship. Not only were the Levites sought out to participate in the worship service, so were the musicians. Musicians came with their instruments from surrounding towns to celebrate all God had done for Israel. This gathering of the people united the residents of Jerusalem with the Israelites residing in the countryside.

Look how they came in verse 27; joyfully. They were brought to joyfully celebrate but before they could celebrate there needed to be a purification (vs. 30). We don’t know exactly what this purification consisted of. It may have had something to do with ceremonial washing, fasting could have been involved, it could have involved abstaining from sexual relations and possibly sin offerings. The gates and the walls were purified also. The gates and walls may have been purified by sprinkling them with the blood of the sacrifices. All of these were part of the purification ceremony described in the Law of Moses. It would not have been uncommon to purify animate and inanimate objects.

Why would they start with all of this purification? Because joyful worship requires a pure heart. Have you ever tried to worship while harboring or hiding sin from the Lord? It makes it almost impossible. Some people come to church, put on a smile and try to worship the Lord all while hiding sin in their hearts. The book of Hebrews says,


“let us draw near to God with a sincere heart and with the full assurance that faith brings, having our hearts sprinkled to cleanse us from a guilty conscience and having our bodies washed with pure water.” (Hebrews 10:22).

Before you walk into church do you ask God to cleanse your heart? Are you in the regular habit of confessing your sin before worship? If not, now is a great time to start purifying yourself before worship. The truth is, God cares more about the heart in worship than in the voice.

Let me explain this more. When I surrender my life to the Lord at the age of 20 I began attending a growing church that meet at San Diego State University. The worship was great. The sermons were convicting. The 7:15pm service was full of young people. And the girls were hot! I would arrive early, walk down to the very front of the church and pretend that I was looking for a friend. While scanning the crowd I would look for the hottest girl I could find with a seat open next to her. I did this a few times in an attempt to meet girls with little success. The reason; my heart was impure. After trying this a few times God convicted me of my actions. How could I walk into church and make picking up girls my main focus. I needed to purify my heart and focus on God. This is what the Israelites did. They purified their hearts and turned their focus on God.
Posted by Neal Benson at 4:18 PM 2 comments:

Three Ways to Pray for our Young Adults Retreat 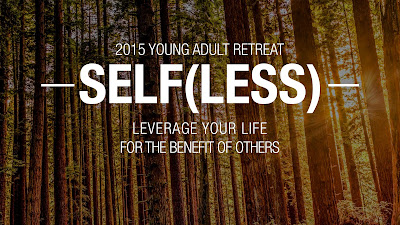 This weekend our Young Adult ministry is heading to Camp Hammer for a weekend retreat. Its been a few years since I've lead a retreat and I'm really excited because I know the impact it has. There is something special about getting away from the day-to-day and connecting with God in the trees.

For this weekend we're bringing in Christian Huang to teach us. Christian is super passionate and living on the front lines of ministry. He and I've hung out a few times and I'm really looking forward to hanging out more with him. We're also going to have Josiah James come and lead us in worship. Josiah is a great friend of CPC and pretty much leads at one of our campuses on a monthly basis. He is going to do a phenomenal job leading us into the presence of God.

I'm really excited for this weekend and praying for what God is going to do in the lives of our Young Adults. Will you join me in prayer for the weekend? Here are three ways you can pray for our weekend:

1) Pray for Christian and Josiah
These guys are going to be leading our chapel times and helping us draw closer to God. Will you please pray for God to use them?

2) Pray for new connections
For many people this will be their first time going away with our Young Adult ministry. Will you please pray for people to make new connections that will help the grow in their walk with Christ?

Thanks for praying for our time away!
Posted by Neal Benson at 9:09 AM No comments:

Confessions of a Pastor: I judge

We've currently been studying the book of Romans at my church and I preached a few weeks ago on Romans 2:1-16. At the beginning of chapter 2 Paul writes this:

As I studied for this sermon I stumbled upon a psychology term called projection. The people Paul is addressing were passing judgment on others to make themselves feel better. Paul uncovers a common human shortcoming, namely our tendency to be critical of everybody except ourselves. Think about it, we have a keen ability to point out in others the faults we see in ourselves in ourselves. We expose the shortcomings of others while concealing our own similar shortcomings. This tendency was made popular in 20th century psychology by Freud and is called “projection”, but we see that Paul described it centuries before.

It reminds me of an encounter that occurred between the king of Israel and the prophet Nathan in the Old Testament. Nathan came to King David and shared a short story about a rich man and a poor man. The rich man had a huge farm and tons of livestock, but the poor man had only one little sheep and this sheep was like a member of the family to him. The rich man had a guest in town, but he didn’t want to turn any of his cows into hamburger so he went to the poor man and forcefully took his only sheep for his guest’s dinner. David burned with anger and instantly condemned the man. Then Nathan extended a pointed finger at David’s chest and revealed to him that he, David, was the rich man in the story. You see, David committed adultery with Bathsheba and killed her husband to cover up his sin, but he was so very quick to judge the other man in the fictional story.

Bring it to our lives. I find that I am more likely to find fault with my children for things I struggle with myself than for issues I don’t tend to struggle with. Let me give you an example. One of my daughters is constantly saying, “I want.”  When she says this I get upset, but each time these words leave her mouth I get increasingly upset. As I’ve examined this I’ve realized the failure lies within me. My disgust with my daughter’s words is a direct reflection of my own selfishness. She hears me say, “I want a new iPhone,” “I want a new GoPro.” I am the hypocrite. I am condemning my daughter for my failure!

Its interesting that we are far quicker to judge others than we are to judge ourselves, and by doing so we condemn ourselves! So if I just leave it here basically it sounds like this, "We suck and there is nothing we can do."

But that's not it. The problem is a deep heart issue and we need to address it. The first part is to identify the issue so we can address it. This week will you take time to identify an area where you are critical of others but give yourself slack. Once you find that area take time to work on improving and being less judgmental.


“Do not judge, or you too will be judged.  For in the same way you judge others, you will be judged, and with the measure you use, it will be measured to you." Matthew 7:1-2

Posted by Neal Benson at 5:09 PM No comments: