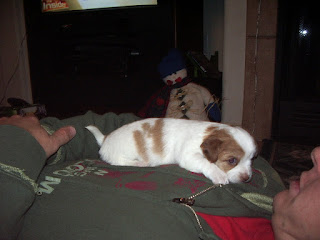 In January 2006, after being married for a year, Charity and I decided that we needed a dog. Actually, I may have been the one to decide that! Our friends The Rock's dog just had puppies and they gave us one! We wanted a girl and sure enough there was only one girl: we named her Rosarita or Rosie for short.
Rosie was kinda like our baby for a long time. We took her everywhere!

Well, almost everywhere. We took her to Utah with us on a trip one time, she went to So Cal but never made it anywhere overseas. She loved to sit on my lap in the car and put her head out the window. She didn't what to do when it rained because she was not a fan of the water and when it snowed her she was shocked! The Sophie came and Sophie loved Rosie! When we first brought Sophie home Rosie was a little protector of her and it was so rad!

About a month ago Rosie bite Sophie in the face. I was pretty bummed but told myself because she didn't break the skin that it was ok. I also tried to rationalize it that because we had been gone so much this summer she was just getting re-established in our home. Later that week Rosie tried to snip at Sophie again; I was super bummed. It was a Saturday and I just cried for about 3 minutes.

I was planning on taking Rosie to the pound but just couldn't do it. Then when our house had water damage I needed to take Rosie to our friends The Rock's house. While Rosie was there I asked Nancy if she would find Rosie a new home. So Rosie has a new home now. She has been there about two weeks and we miss her. I miss her eating everything that Sophie drops on the ground. I miss taking her for walks and I just miss my dog. I know I made the right choice but so many times in life the right choice is so hard to make!
Posted by Neal Benson at 10:34 AM

Aww Rosie! I'm bummed for you guys too! :( Her and Savanna were so cute together when they were puppies. Overall, sounds like you made a good call.