As a youth pastor it is becoming increasingly difficult to find something going on in the world that I want to get involved in. I mean there are some great organizations out there but it seems like finding something with honest morals, character and integrity is tough to find now a days! 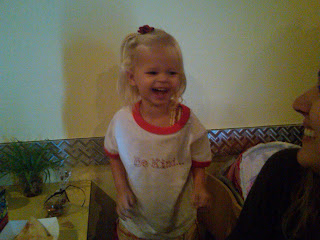 There is a foundation out there that I have come to know well and is something that I just want to partner with, tell everyone about and buy the t-shirt for me and my kid! Its called the Josh Stevens Foundations and its based on a moto that one young boy chose to live out. I never had the opportunity to meet Josh (I bet I would love him) but have I been able to meet his family and multiple others who knew him personally and he is the kind of person that makes you want to be a better person.

Unfortunately Josh's life was cut short; but the cool thing is that this kid is leaving a legacy here on earth and his message is inspiring me (a 30 year-old man) to be a better a person. Its not a super gnarly message with intricate words that is tough to follow. I haven't seen something crazy that you have to sign to be a part of this movement; in fact the message is so simple that you can read it on the front of my daughter's t-shirt "Be Kind..."

This is the moto that Josh lived by. I've heard stories from the students I work with about what a great kid Josh was and its true! They don't have to say much really because I can see that Josh was a great kid by the conversations I have with his sister (family knows best). But more than any of that I see that he had a lasting impact on the world with the message he chose to live his life by and that message is still alive and well in my community.

It seems appropriate to add this video that the local news station did about Josh. If a picture is worth a 1000 words this one is priceless: