If you've been discouraged with the world lately at all (maybe you've seen: the government shut down, school shootings, war, disease, or death) then you need to read this because it helped me!

Earlier this month our family went on a vacation to Disneyland (the happiest place on earth).  After spending approximately 10+ hours in California Adventure our Sophie asked for a toy.  Now we're not the parents who buy our kids everything at Disneyland.  In fact, we may be the opposite.  We bring in our snacks, drinks and lunch.  We want to buy them a treat while we're there and even will splurge on a stuffed animal. 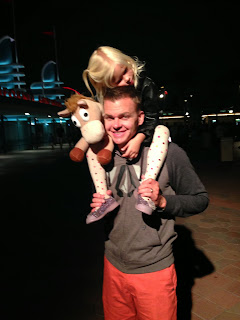 Sophie had been doing an amazing job.  Leah wasn't feeling well so I had been carrying her most of the day.  As we approached the world of color Sophie had seen someone carrying a Bullseye toy (think Toy Story).  We headed over to the boardwalk to find one.  As we entered the first store, bullseye, there she was!  Unfortunately it wasn't the one Sophie wanted.  We were told we could win one just down the way, so off we went.

We found the game where you can win bullseye.  Unfortunately we were too late, they were closing the carnival style games.  This is about when Sophie lost it and began crying (remember, its past her bedtime).  As we approached the world of color we saw a man carrying the Bullseye horse she had been looking for, it was hanging out of his backpack.

I approached the unknown man and asked him where he got it.  He told me he won it over on the boardwalk.  I shared how it was closing and this was the only thing Sophie wanted.  As he looked at the 5 year old on my shoulders he took his backpack off, removed the fluffy horse and it handed it to the beautiful blonde on my shoulders.

I pulled out my wallet and tried to give him money to which he refused, so I tried again and he refused again.  He was so generous and even excited to give the horse to my daughter.  He even told us he was giving us his 13 year old daughters toy he had won for us!  WHAT!!! ARE YOU SERIOUS?!?!?  A stranger just gave me a toy he won for his daughter and wouldn't take my money.

That night I learned another lesson from God.  The lesson of: you have not because you ask not.  Sophie learned a lesson too: there are still good people in the world.  She doesn't know about all the crap happening in our world but she knows a complete stranger gave her something she longed for.  The question I ask myself now is: "How do I give to others to make sure good people always exist in this world?"
Posted by Neal Benson at 9:32 PM

so nice! thanks for sharing!