Driving, swearing and flipping off 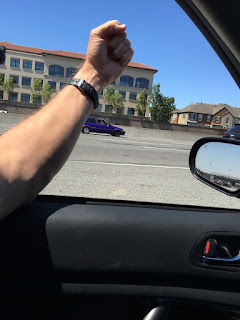 When I was 24 I took my first pastoral role at church in San Diego. One day I was driving home from work and preparing to merge onto the freeway. My onramp was one of those large onramps with two lanes that merged into one before merging onto the freeway; it was super confusing. This day there was a car next to me and we were pretty even entering the freeway when out of nowhere he cut me off in the merge. It's not that I was driving a fast truck, it was just that he was behind me and almost hit my truck. The next thing I knew my left hand flew out of my truck window with my middle finger extended as far as it possibly could. Next thing I knew, I told this person I thought they were number one in my book.

I was shocked, I was embarrassed and ashamed all at the same time.

I wanted to quit being a pastor. I wanted to go home and hide under the bed I was so embarrassed. I wanted to run as far away from everyone as possible. But through that outburst God still loved me. His love never changed for me. God never gave up on me. I actually learned a valuable lesson that afternoon on that San Diego freeway. The lesson is: nothing can separate me from the love of God.

Now I’m happy to admit to you that I haven’t stuck my middle finger up like that since.

Each of us will sin. Each person will do things that we are embarrassed of, find shame in and regret. The bigger question is how do we respond to our actions and sinful behavior. We can run from God, thinking He is mad at us. Or we can run to God, knowing He loves us.

I'm thankful for the words Paul writes to the church in Rome:


38 For I am convinced that neither death nor life, neither angels nor demons, neither the present nor the future, nor any powers, 39 neither height nor depth, nor anything else in all creation, will be able to separate us from the love of God that is in Christ Jesus our Lord. Romans 8:38-39

I may remember this story .... OG San Diego

Dude. So flippin encouraging. Thanks for posting this