This weekend Sophie got her first diamond. You might be thinking: "You gave your 8 year old daughter a diamond?" It wasn't set in a ring. It wasn't affixed to a post that would sit in her ear. Her first diamond wasn't white. 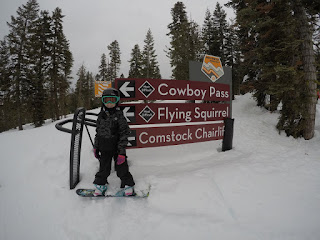 Sophie's first diamond was black. It was found at Northstar after taking the chair to the top. One of the first things she said she wanted to do that day was to take the chair to top and ride a Black Diamond. She wanted to ride a black diamond and she did awesome!

As I think about Sophie and riding her first black diamond with her I have four thoughts that come to mind:

Sophie isn’t a professional snowboarder. She started riding last season. I’ve been working with her on balance and agility for years hoping that she would love snowboarding as much as me! She used to take gymnastics and that really helps with her balance. It took us many rides on the bunny chair, lots of Skittles and other motivation tools to get here.

It took lots of work

Sophie woke up early in the morning for this last trip. She’s spent many hours in the back of the car to get to Tahoe. She’s gone on some fun days of riding with me. We’ve had days where the weather is so nice that you can ride in a long-sleeve shirt! She’s also gone riding on Days were it’s been 5 degrees when we left the house. She’s braved the cold and rode in storms that will make grown men leave the hill. She’s fallen her fair share of times and put in the work to make it happen.

I’ve talked with a few people about her accomplishment and they’ve said: “She did what?” Or someone said: “I don’t have the guts to do that.” It didn’t dawn on me at first but her first black diamond took a bunch of courage. I can’t image how big that hill looks to her. She is half the size of almost everyone else on the hill. She had the courage her point her board in that direction when she could have chosen a different one.

It was a little scary

When we stood on the top of the hill I could see it in her face. She looked over the side and it was scary. Her eyes grew wide. I’m sure her heart rate increased. It’s a gnarly feeling when you can see the top but you can’t see the hill you’re going to slide down; I’ve been there. But she conquered her fears. She didn’t let fear win that day.

Some people think that Spiritual Growth happens over night and it doesn’t. It takes many days of sitting with God. There are times when it feels like God is no where to be found and times when it feels like God is sitting right next to you. Growing as a Christ follower takes time and an investment. It calls someone to step out in faith, to leave what they know to be comfortable and follow Jesus. Sometimes this call brings a person to places they’ve never been or locations they are afraid of.

Being a Christ follower takes courage. It requires leaving the comforts you once knew and embracing the truth of Christ. Some people are ridiculed, disowned or rejected by those they love. But as I look at those who are truly following Christ they know the benefits. They are experiencing the thrill of riding a black diamond!
Posted by Neal Benson at 9:14 PM