Christians are the most persecuted group in 2016

Earlier this year I read an article in my newsfeed on my phone. The heading of the article stated that in 2016 a Christian was killed for their faith every six minutes. This means nearly 90,000 Christians were killed for their faith in 2016, equivalent to one every six minutes. The research was completed by the Italy based Center for Studies on New Religions. The annual study is set to release next month with full details. 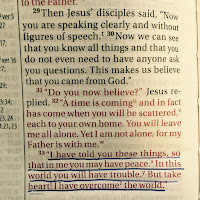 You might find it interesting to know that the number of Christ followers who were martyred in 2016 is less than those who lost their lives in 2015. In 2015 105,000 Christ followers were martyred. The group commented that “It still makes Christians the most persecuted religious group in the world.” Most of the persecution took place in Africa in tribal conflicts. Many people who give their lives to Christ refuse to take up a weapon and fight with their tribe and therefore lose their lives.

The annual study also indicated that between 500 and 600 million Christians were prevented from freely practicing their faith. Right now Christians are being harassed in 110 countries around the world. While we freely gather here, there are other Christ followers who are forced to worship in private locations. But these followers of Jesus are worshipping Him, they aren’t allowing the persecution to stop them. They are worshipping God right now for His goodness in their lives.

Although you may not share a similar experience to other Christ followers around the world, have you noticed how suffering is a tool that God uses to shape your faith?

Have you found that some of the most difficult times are when your faith flourished the most?

Even if you’re not yet a Christ follower, have you found that times of suffering grow your character most?
Posted by Neal Benson at 9:43 AM