The Path to Maturity

It was July of 1961 and the 38 members of the Green Bay Packers football team were gathered together for the first day of training camp. The previous season had ended with a heartbreaking defeat, late in the 4th quarter, to the Philadelphia Eagles. The Green Bay players had been thinking about this brutal loss for the entire off-season. Now training camp had arrived and it was time to get to work.

The players were eager to advance their game to the next level and start working on the details that would help them win a championship. Their coach, Vince Lombardi, had a different idea. He began a tradition of starting from scratch, assuming that the players were blank slates who carried over no knowledge from the year before… He began with the most elemental statement of all. “Gentlemen,” he said, holding a pigskin in his right hand, “this is a football.”

Lombardi was coaching a group of three dozen professional athletes who, just months prior, had come within minutes of winning the biggest prize their sport could offer. And yet, he started from the very beginning. Lombardi's methodical coverage of the fundamentals continued throughout training camp. Each player reviewed how to block and tackle. They opened up the playbook and started from page one. His team would become the best in the league at the tasks everyone else took for granted. Six months later, the Green Bay Packers beat the New York Giants 37-0 to win the NFL Championship

There were players in that locker room who probably thought their coach was crazy. These players were some of the best in the world. Think about what Vince Lombardi did for the Packers. How would you respond if that was done for you spiritually? 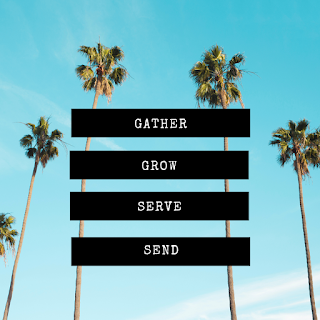 In my opinion the church can loose it’s focus. For the last year, our church has been working hard at getting laser focused.

Very few people have experienced a clear pathway to spiritual maturity. In fact, the path to God is not always a straight line. Believers experience twists and turns, confusion and frustration, joy and fulfillment.

When people go to the gym they hire a trainer to help them accomplish their goals. People seek the advice of a financial planner to help them get to their desired location. The roadmap for Coastline is intended to do the same for each of us. It involves four steps that we will look at: gather, grow, serve, and send.

We gather because that is what the early church did


Every day they continued to meet together in the temple courts. They broke bread in their homes and ate together with glad and sincere hearts, 47 praising God and enjoying the favor of all the people. And the Lord added to their number daily those who were being saved. Acts 2:46, 47

The early church once met in the synagogue because following Jesus was a fulfillment of their Jewish heritage. They found the hope in the coming Messiah just like many of us have found. Men and women found the truth in God’s word and it gave them direction in following God. We gather just like the early church did. We gather in a different location than a synagogue but we still gather.

We long to be a church that unchurched people love to attend. Did you know it’s Biblical for people who meet Jesus to bring their friends to meet Jesus also?


Andrew, Simon Peter’s brother, was one of the two who heard what John had said and who had followed Jesus. The first thing Andrew did was to find his brother Simon and tell him, “We have found the Messiah” (that is, the Christ). And he brought him to Jesus. John 1:40-42

The first thing Andrew did was find his brother Simon and bring him to Jesus. Who can you bring to meet Jesus? It’s Biblical to help people find Jesus. We’re not looking to be the biggest church, we’re just trying to help more people find the hope, love, compassion, and salvation we’ve found in Jesus. There are people who are looking for the coming Messiah just like these men were.

We’re going to use the same message the early church used. The method might be different, but the message hasn’t changed.

After you’ve been to a gathering make a commitment to grow spiritually. One of the primary ways we see people growing in their faith is moving into a small group. This is a big spiritual growth step. Flip back to the book of Acts to see what a small group looks like


They devoted themselves to the apostles’ teaching and to fellowship, to the breaking of bread and to prayer. Acts 2:42

We live in a time of increasing Biblical illiteracy and being involved in a small group is a way to combat this. Groups help you open your Bible on a regular basis. Groups give you a safe place to share prayer requests with trusted individuals. I believe, with my whole heart, that if you will commit to being in a group for ten weeks it will change your life forever. Your marriage will be stronger, you faith will be stronger, your passion for Jesus will grow, and your confidence in Scripture will increase because you are going to know God more!

People gain confidence in God and His truth by studying His word with others.

I’ve been following Jesus for over eighteen years now. The first group I was in was a men’s group who really shaped my faith as a young man. Those men taught me about prayer and Scripture memorization; they shaped my future for Jesus. When I got married, Charity and I attended a small group focused on marriage. It was refreshing learning from couples who had been married for ten, twenty and thirty years. I can still hear those couples saying, “You guys could be our kids.” And we needed to learn from them.

After you gather to worship and start growing in your faith there is a natural progression to serving others. Quite often people think of serving in the negative sense. It can sound like something that is below a person. Let me remind you about Jesus

Jesus spoke of His eternal Kingdom when a mother asked that her two sons sit on the right and left. It seems this happens frequently, we have half the information but what all the benefits. God had already determined who would sit at the right and left of Jesus, it wasn’t a debate. Jesus needed to remind His own disciples that He is a servant.

For you and I, serving is the next logical step in growing in our faith. When I was a young man and had been attending church for a few years I began serving. I began serving in a classroom full of four year olds. It was a joy! I had so much fun serving those kids. They gravitated to me and I learned about the love of God. Their kindness and acceptance began to transform a former drug dealer. Serving taught me more about the love of God than I think I taught anyone.

You might wonder why we want to see people serve. First, we think it’s Biblical. Second we are a non-profit. Third, we think you will find fulfillment in life when you serve others. Fourth, we think God created you to serve others.


"But you will receive power when the Holy Spirit comes on you; and you will be my witnesses in Jerusalem, and in all Judea and Samaria, and to the ends of the earth.” Acts 1:8

Jesus gave the disciples a clear direction on what to do. After saying these words, Jesus ascended to heaven. Let’s talk about a realistic plan of action for those of you who are ready to be sent. I’m aware that not everyone will grow to this point in their spiritual growth, in fact, I recently heard that 90% of Christians will never share their faith. Ninety percent of people won’t share the hope that changed their life.

Let’s look more at what Jesus instructed. Jerusalem was the center for many of these men. Jesus was essentially saying, “Start right here. Start right where you are at.” I give you the same encouragement today. Start sharing the love of Jesus with those closest to you. Start in your neighborhood, your home, your work place or your school. You don’t have to be a trained evangelist to share your faith. But the hope is that since you’ve been gathering, God is working in you. Your small group has helped you grow in your faith. Through serving you’re looking more like Jesus. Now you can confidently be sent to tell others about Jesus.

Once you’ve shared the love of Jesus with those closest to you we want to see people start serving in our community.

From there we long to see people invest more into helping people find and follow Jesus. We have a handful of mission partners who are in the state of California.

After this, we’d love to see people go global. We’d love to see every person get on a plane once every five years to serve the world. This follows the progression Jesus gave us in Acts 1:8.

Finally, when we think about being sent, God might do something a little more. We want to be a church that plants churches. We are praying that in three to five years God will let us plant a church somewhere in Ventura County. We don’t have all the details. We don’t have a plan. But we have a vision and a passion.

When we think about a pathway to spiritual maturity, this is a life long commitment. Following Jesus will be the best commitment a person can make. Think back to the locker room talk Vince Lombardi had. He took professional players though the basics and they won. Let’s focus on the basics so we can grow in our faith. The path to growth is not like McDonalds.

The path to growth is a lifelong process. This is why I want you to commit to a life of spiritual growth. Commit to a life of looking and smelling more like Jesus. This might take a while. It might be slower or faster than you thought. It might be harder or easier at times. You might hit road blocks. But don’t quit.

“If Christians around the world were to suddenly renounce their personal agendas, their life goals and their aspirations, and begin responding in radical obedience to everything God showed them, the world would be turned upside down. How do we know? Because that's what first century Christians did, and the world is still talking about it." -Henry Blackaby