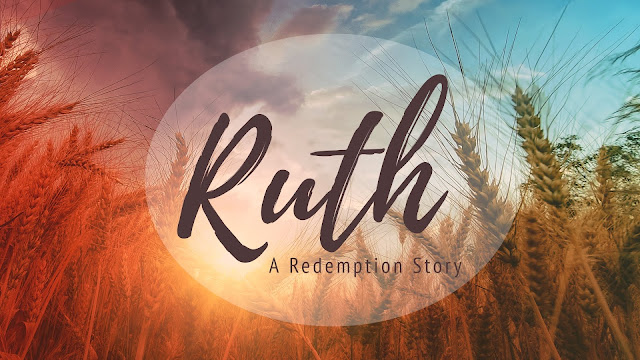 Our church is currently studying the book of Ruth. For four weeks we're walking through the book and talking about the redemptive story of God. For this series I volunteered to write the small group questions that go along with each sermon. It seemed like a waste to leave them in a file on my computer and not share them with everyone.

The book of Ruth is one of two books in the entire Bible that are named after women. Ruth is the only book in the Old Testament named after a non-Jew (She was from Moab). This speaks to the impact that Ruth had on the people of God. The book offers us no hint to who authored it, but the time frame puts it in the time of the Judges. Ruth takes place during the time of the Judges and likely early in that era, as Boaz is the son of Rahab, who helped the Israelites very soon after they entered the Promised Land. The book contains a great deal of dialogue. The three main characters are: Boaz, Naomi, and Ruth. Of the three, Ruth is the one who speaks the least in the book.

1) The book of Ruth is a true love story. It contains heartbreak, loss, tragedy, romance, and drama. When you think about your favorite love story, what is most appealing about it? What is most memorable?

2) Read Ruth 1:1. There was a famine in the land but the author doesn’t explain its origins. In Deuteronomy 28:15-68, Moses tells the Israelites what will be the consequences for their disobedience. Look over these verses and discuss.

3) Elimelek’s name means- God is my King. His departure from Bethlehem could be an example of his loss of faith. When have you wanted to walk away from God? What kept you from walking away from the Lord? What drew you back?

4) Read Genesis 19:30-37 to see the start of the Nation of Moab. Read Numbers 25 to see how the Moabites lead Israel astray. Talk about the history of Moab.

5) Read Ruth 1:8-15. Naomi is insistent on sending Ruth and Orpah back to Moab. She uses tough love, encourages them to return, and blesses them. Why do you think Naomi didn’t want them to return with her? Why does Naomi bless them, but see herself as being at enmity with the Lord?

6) In Ruth 1:16-17, Ruth makes a bold statement about following Naomi. What are some key elements of her commitment? What was she giving up and what did she gain by following the Lord?

7) Read Ruth 1:19-21. Naomi saw herself as an enemy of God. When have you been in bitter distress and in need of a Godly friend? How did that change things?

Close your time in prayer
Posted by Neal Benson at 10:52 AM