About 3 years ago I switched over from the dark side to the light; by that I mean I got a Mac.  Now when I got a Mac so did the rest of our church staff.  Some people got a Mac Mini, some got a Macbook and there were a few iMac's.  I was super thankful for the new computer and while learning about my Macbook fell in love with it.  We also ordered this thing called  "Apple Care".  At the time it kinda seemed like a waste to me but I did enjoy being able to call Apple and ask any question that I had about my Mac. 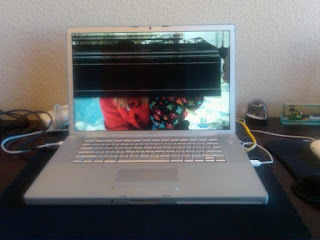 So I called Apple Care and told them the story of what happened.  The guy on the line booked me an appointment at the Genius Bar for 3pm that day.  I told the guy what I had done and how it broke.  He looked at it real quick and told me that we could fix it.
He said: "It was an easy fix; just four screws to remove."
When he said that I jokingly said: "Can you just put a new hard drive in there while you're doing that?"
His response was: "Ya for sure."
I thought he was joking but he totally wasn't.

Not only did Apple fix my broken screen, but they gave me a new hard drive too (and a bigger one)!  Oh ya I forgot to mention that they gave me a new battery too.  Now you have to be thinking; "What is the cost on that?"  Great question.  The cost would have been $692.  The great part; I had two days left of my three year warranty.  You know what that means?  I will be buying Apple Care for every Apple product I buy from here on out!
Posted by Neal Benson at 6:50 PM