Yep... I am 31 years old.  I lived in San Diego for almost five years and it took me driving just over 300 miles from Las Vegas to go to my first San Diego Chargers game!  This trip was actually super cool for me because I was able to take it with some young men who recently graduated from our high school ministry; Nevin Zwifel, Nick Markovich and Anthony Rossa.

We left Vegas around 8pm on Wednesday night and headed to Corona to stay at Nick's cousins house.  We left Corona early Thursday morning and headed to the beach.  It was great spending the day at the beach with these guys and my friend Jon Miano actually came and hung out with us (Jon was a student when I was an intern in San Diego almost nine years ago). 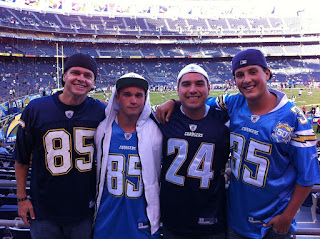 After the beach we headed to Wahoo's Fish Tacos and I got one of the best burritos I have ever eaten.  After filling up we took the trolley over to Qualcomm Stadium to see our first game!  Here is a cool pic that I will never forget.  It was great to spend the day with these guys at the beach and then head over to the game.  We got these nice and early to watch the team warm up and we made sure to boo for the 49'ers as they came out. 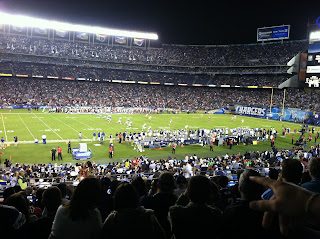 I have to admit that our seats were literally perfect!  The seating may have gotten a little better but for me this was perfect.  We were close enough to see the action but not too close that it was tough to see the field.  We weren't too far either; I never found myself watching the game on the big screen.  It was crazy for me how quick the game seemed to go.  It was like one minute it was sunny and the next it was dark.  The game seemed to fly by being there in the action.

I have to admit that I was a little bummer that Rivers, Gates, and Jackson didn't start but I can get over that.  I am so thankful to Nick for taking me to this game.  Now the coolest part is that I have been able to invest into the lives of these guys for over 12 years (Nevin 7 years, Nick 4 years and Anthony 1).  It was great to spend some time with them as they are starting college, getting for the Marines and becoming men.  I can't tell you how thankful I am that I got to attend this game but more importantly to spend time with these men.
Posted by Neal Benson at 9:31 PM