The Power of an Invite {Part.Three}

Now that I had been invited to church and God had done some amazing changes in my life, I began to live my life differently.  I stopped drinking (personal choice) because I know where it had taken me in the last few years.  I also stopped doing drugs because I just didn't think that lined up, Biblically, with my new decision to follow Christ.  I started to serve at my local church and helped out in our children's ministry (this was a great place for me to grow spiritually).

Then one night I had the chance to invite someone on the journey I was taking.  I was at a friends house from Big Bear who had recently moved to San Diego.  He was living in a large house a couple minutes from my place with a few other guys who were all from Big Bear also.  The house was a full on party house so much so that they called it the Playboy Mansion.  It was a Saturday night and I was hanging out at the house when someone asked me about why I wasn't drinking.  I began to share my faith and what God was doing in my life.

At that moment my friend Brian walked out of the room and headed, quickly, to his room.  I wasn't to sure what he was getting in his room and to be honest I thought he was grabbing a gun.  He came out of his room shaking a Bible and saying (loudly): "I want to understand this book and what it means."  I knew he was drunk so I told him what I knew I safely could and then invited him to come to small group with me on Tuesday when he was sober.  He accepted the invite and the conversation changed. 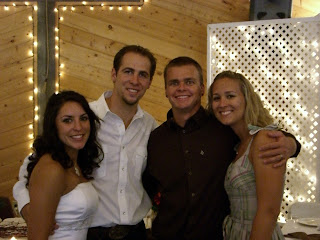 On Tuesday I pulled up to Brian's house and went inside to get him.  He totally forgot that he had said he could come to small group but he ended up coming with me.  That night, in small group, Brian broke down in tears and confessed his sin.  God was working heavily in his heart and he accepted Christ that night!  Brian was in desperate need of a savior and God used me as a man to invite him to church.  Our friendship has grown so much that I was able to preform his wedding ceremony!  Brian is one of my best friends and I am so proud of what God has done in his life in the last 10 years.  I often wonder what would have happened in Brian's life if God never used me to invite him to church...
Posted by Neal Benson at 3:34 PM

Neal,
I cannot thank you enough for being obedient to the work God had you accomplish in my life. You asked "where would he be"? Dead or in prison I can say for certain. A youg man full of childhood pain and anger, selling drugs, and running with a crew that are mostly dead, in prison, or still living the same routine was bound in one direction, destruction. Yet I was given a new life one night by an obedient bondservant who was carrying a message of love for a black hearted man.
It is funny how the omnipotent God of the universe uses weak and foolish beings to accomplish his labor of Love, but oh what a joy it is to know and expereince this new life and have the honor of serving Him and His purposes.
Where am I today? The only place someone can be who has seen and felt the heart of God toward the world. Sharing His love for a lost and hopeless world; in hopes that someone else may be set free from the chains of this life!
Thank you again brother.