A few months ago I had coffee with a super creative guy. My friend Brain Berry introduced me to Mark Campbell. Mark lives across the Bay from me and is leading at a super cool church called Neighborhood Church in Castro Valley. At this first coffee with Mark we talked about Men's Ministry, life, a little of our history and good movies. 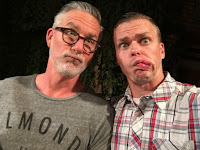 After our first connection Mark invited me to speak at their Men's Ministry on a Wednesday night. They do something super cool called Road Crew dinners. The night officially starts at 6:30pm but in my mind the connection time started much earlier. When I rolled in around 4pm there was already a few guys grilling up some killer Mexican dinner. Other guys were making sure the room was ready. There was bantering, smiles, laughter and high-fives.

As the sun began to set the men started rolling in. I always think that food attracts people; especially men. Mark is helping to reach the most difficult population in a church, the men.
Men don't seem to naturally attend a church service.
Men actually seem to think that church is lame.
Some men will never enter a church.

On Wednesday night there was a room full of men. The age range was all over the place. There were 14 year olds and 75 year olds there. There were guys who just graduated from college and men who have been married for 30 years. It was a super cool experience to be a part of. I felt privileged to be invited to share with these guys what God is stirring in my heart and life right now.

As I've thought about my time there, I have a few things that stick out to me:
* Guys need a fun environment to connect with other guys
* Food attracts and keeps men coming
* Relationships keep guys connected more than food
* Good leadership knows these facts
* Good looking material makes a difference
* People don't care what you know until they know that you care
* Guys need other guys in their life to grow strong in the Lord 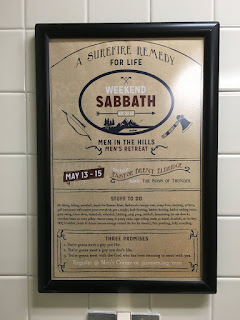