Monday night Charity went out to do some Christmas shopping and put the kids to bed. I was at home watching some TV and the lights kept flickering; they would go on and off. Finally the power died around 10pm. I knew the Thomas Fire was out in Santa Paula but had no clue how close the wind had pushed it in such a short period of time. The winds were hitting gusts of 60mph and were blowing extremely hard all night long.

Around 10pm I texted Charity and told her I was going to bed. See at this point I hadn't been out front of the house, only out back to take Roxie potty. I got ready for bed, in the dark, and laid down to close my eyes hoping my wife would be home soon. When Charity got home about 30 mins later she told me to start packing the house, that we need to leave because the fire was rapidly approaching. She could see the huge glow as she drove home and the fire was spreading rapidly.

I got out of bed and to my surprise the night sky was light up with a glowing red. We began packing what we considered “irreplaceable.” We stayed as calm as possible and thought about what our next moves would be.

That night was filled with many trips outside, conversations with neighbors and watching the fire slowly creep over the hills north of our home. It was sobering to see massive flames take over the hill and head towards homes just to the north of us.

It was a sleepless night where a handful of times I planned to wake up the kids and leave our home.
It was an anxious night with many text messages and little battery life.
It was a worrisome night as we thought about the food we might loose with the power outage.

We weren’t the only ones going through a variety of emotions. Neighbors were climbing on their roofs to see the spreading blaze. People were forced to leave their home on a moments notice. People in our church lost their homes. The fire hopscotched through Ventura on Tuesday, burning hillside homes, reaching into subdivisions and also consuming a hospital and a large apartment building. The fire swept through blocks, taking some homes and sparing others.

Thankfully the only damage we know of at Coastline was a downed Palm Tree. God spared our church and our home but not everyone was as lucky. The Thomas Fire continues to spread. The work to restore what was lost will take years. Hundreds of people are displaced for their homes. Some will never see their possessions again.

As I write this, school is still closed for our children. The air quality is nothing like you'd want to breathe on a daily basis and our city smells like a campfire. It's been a hectic time. But, the church has gathered to pray and help. Leaders in our community are continuing to lead well.

Many of you have texted, called and messaged me to see how we are doing. We are safe and thinking about what is next. We are not first responders, in a situation like this, but the church is mobilizing to help. Please keep Ventura in your prayers! 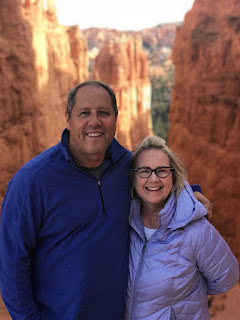 Bret Johnson is a Christ follower, husband, father, entrepreneur and pastor. Bret grew up in sunny Southern California and currently lives in Henderson, NV. Bret is marries to Sallie Johnson and they have three wonderful adult children. Bret leads The Hastening, preaches, teaches and encourages young leaders. Bret has a deep desire to see people who are far from God draw near to the Lord.

Bret and I met late in 2004 when I was applying for a role at South Hills Church Community in Henderson, NV. Bret took a risk on hiring me and invested in my life for about five years while we were on staff together (my mom still talks about what a great communicator Bret is). Bret has the gift of hospitality and loves to welcome people into his home. When I first moved to Vegas, Bret invited my mom and fiancé over for Christmas dinner. Bret also has a passion for missions; he and I went to Mexico to scout out a location where we could introduce students to their first missions experience.

1.  You’ve just started a new ministry called “The Hastening.” Tell us about this ministry.

The term “hastening” comes from Peter’s second letter in the New Testament. Here’s what he said:

“ But the day of the Lord will come like a thief, and then the heavens will pass away with a roar, and the heavenly bodies will be burned up and dissolved, and the earth and the works that are done on it will be exposed.   Since all these things are thus to be dissolved, what sort of people ought you to be in lives of holiness and godliness,  waiting for and hastening the coming of the day of God, because of which the heavens will be set on fire and dissolved, and the heavenly bodies will melt as they burn!  But according to his promise we are waiting for new heavens and a new earth in which righteousness dwells.” 2 Peter 3:10-12

I formed The Hastening as a ministry this year to do several important things:   encourage renewal, revival and prayer in the body of Christ; equip the church (especially in Las Vegas) to understand and have a passion for Jesus' fame among all nations (which is the ultimate goal of all of history); network with Pastors and ministries in the Las Vegas Valley and encourage unity among churches and ministries.   John PIper has said, "You're either a zealous goer or a zealous sender (in relation to Christian missions) or you're nothing."  The Hastening is really meant to help Christ-followers understand their important role in finishing the great commission.

2. Doing ministry in Las Vegas is radically different from pretty much everywhere. What do you find most exciting about this call?

Las Vegas IS the mission field.  It's in the United States but it is a mission station for sure.  5% of the 2.1 million people who live in Las Vegas are evangelical Christians.  There are as many Mormons in Las Vegas as evangelicals. Many metro areas in the US have up to 40% of the population who are evangelicals-- places like Dallas, Atlanta, Memphis, etc.  There's a ton of opportunities to reach people.  People are not "cultural Christians" here.  They are lost or found....plain and simple.  People have come here from EVERYWHERE also.  A person reached for Christ here can have an impact in many parts of the world.

3. You’re an entrepreneur and a church planter. What do you think is the toughest part about church planting?

Far and away the toughest part of church planting is having it supported well.  The typical church plant contains a passionate Pastor and his wife and a lot of promises of support by people and churches- and honestly, just promises.    We were fortunate in coming to Las Vegas.  The Christian & MIssionary Alliance got behind us and committed $250,000 to us.  In addition, our home church paid the salary of our #2 guy for two whole years.  Another church in our sending city took a quarterly congregational offering for two years!  Each offering averaged $10,000!  That wasn't our home church!  What did they get for that financial commitment?  A church that grew to over 1,000 people in eight years.  And the most dynamic student ministry in the city in just a few years.

4. You’re a dad to three amazing adult children, what are some things you and Sallie did early in their lives to help your kids become the people they are today?

One of the things that attracted me to Sallie was that she was from a Christian family.  Not just her folks but her grandparents on both sides, aunts & uncles, truly committed people.  That was in sharp contrast to my family who I love dearly but it's just the truth.  I had a sense that when we had kids her influence and her family would really be a blessing to our kids and they would benefit from that legacy.  In addition, I think we created a healthy home-- not a perfect home-- just a healthy home.  Sallie and I worked hard both in church and at our jobs but one of us was almost always with the kids OR the grandparents watched them.  So our kids got lots of attention and care.  Kids will generally thrive if you give them a healthy environment.

5. There are many men who don’t have a life outside their work and family. What is one hobby you enjoy doing and that fills you up?

Sallie and I love to travel.  We take several short trips a year and try to see and do some different things.  We are not rich but we are smart travelers.  We were also blessed by some friends who gave us a timeshare to use so that gets us to some different places.  Our kids now live in three different states and we have family in Portland.  So, just keeping up with family means traveling some.

6. If you could give your 20 year old self one piece of advice what would it be?

That's easy.  Find a good counselor!  Deal with your junk, your family history and your sinfulness.  Find someone you trust and can be honest with.  My generation did not do soul work very well.  Millennials today are more open to this than we were (thank God!).  I have come to the conclusion that almost all of us would benefit from going to a counselor as often as we go to a medical doctor!
Posted by Neal Benson at 10:56 AM 1 comment: 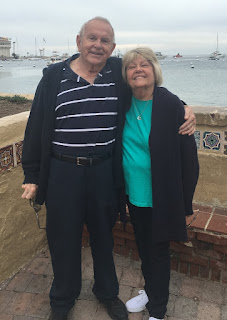