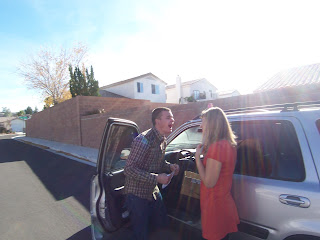 As I was thinking about the tattoo I began to think about the road we, Charity and I, have traveled with Sophie.  I remember when I found out that she was pregnant and the day that Charity told me!  My great friend Conrad was in town and he knew before me that Charity was pregnant!  It was cool that he was there to take this picture when Charity told me that we were going to have our first child!

As time went on, approximately two weeks later, we had a scare.  Charity was having issues and we didn't know what to do.  I asked my friend Janice Yurek what we should do and that is when both told each other that we were pregnant (our girls are 5 days apart).  I ended up leaving work early that night and Charity and I spent hours in the hospital; we were scared, nervous and prayerful.

The rest of the pregnancy was pretty much event free... until it came time for Sophie to come.  Sophie was doing great but ended up having meconium aspiration (which means she went to the bathroom before she came out) and it can be very dangerous.  You can go check my blog (using this link) to see all that we went through when Sophie was in the NICU for the first 6 days of her life.

After she was released from the hospital we thought we were in the clear but had no clue we would be sent back to the ER less than 5 days later.  Needless to say I broke down crying on the phone but stayed strong the rest of the next 24 hours that we were in the hospital.  Since then we have had our bumps, scraps, cuts and bruises.   We have also had rad times at the Zoo, fun petting dogs, riding ponies, visiting grandparents, seeing aunts and uncles and growing as a family. 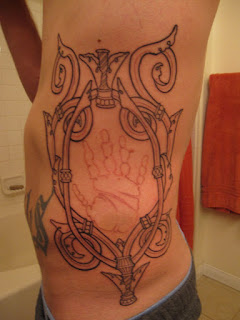 When I look at my newest tattoo it reminds me of some of these stories but more than anything I think of the huge blessing that Sophie Marie has been to our lives.  I think of how I cried when she was born or the day she said her first word.  I think about how she grabs my face and says "You're my favorite daddy in the whole world."  I am so stoked on this tattoo and how great of a job that Johnny Five (if you are in Vegas and need at tat call Johnny and tell him I sent you) did on it!  This was just the first session so there is more to come but that is Sophie's hand print in the middle and it just shows how much this little girl has touched my life.  Don't worry, the spot above the frame is saved for Leah's hand when she gets a little bigger.  I can't imagine my life without my little girls in it!
Posted by Neal Benson at 8:36 PM