I know that there are some people who swear by having a denomination that they are affiliated with and others who prefer to be on their own.  I have really been a part (on staff) of churches that are affiliated with a greater group of church.  Now I know that people are going to have their reasons for either way and we all have our personal preferences but let me share some of my experiences in the last seven years at my church.

When I was hired I was required to get licensed, and ordained, through our denomination.  I really didn't know much about what I was getting into but when I started studying more I really started agreeing with their stance on theological issues and doctrinal points.  It took me about two and a half years but I finally was ordained September 2007 through the Christian Missionary Alliance (now called The Alliance.

The longer I was with The Alliance the more I learned and the more I appreciated them.  I began to find out that more of our churches are located overseas than an in the United States.  I also learned that we had missionaries in Vietnam that never made it out alive and it was tragic.  Once Vietnam was opened again (as a safe country) we sent missionaries in who started making connections and found out that The Alliance was strong over there!  We actually had over 1,000,000 Christians in Vietnam when the missionaries went back and its so cool to see the involvement in spreading the Gospel. 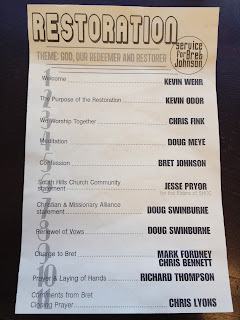 In May of 2009 something happened that I would never have imagined.  Our founding lead pastor resigned due to moral failure.  I was shocked and had no clue what to do.  The great thing is that within two days our District Supervisor was in town and helped out with everything that happened that week.  I was in meetings I never thought I would be in and learned so much that week from the leadership in The Alliance.

On Sunday, April 15th, something really cool happened.  Our District Supervisor was back in town and we had lunch with him before the restoration service for Bret Johnson.  It was very cool to see that our group of churches hadn't abandoned a fellow worker in Christ when he made an unwise choice.  I have been able to spend time with Bret over the last three years and spend lots of time working with our denomination.

In the last couple years I have been able to help other workers get licensed and ordained with The Alliance.  Is our denomination perfect?  Nope, not at all but I trust that I am involved with a group of churches that radically care about advancing the Kingdom of God.
Posted by Neal Benson at 9:56 AM

Great testimony, Neal. And, while I admit my own prejudices, great denomination, too--largely because it continues to act more like a missions-society than anything else. Congratulations on being witness to a truly extraordinary (and unfortunately rare) application of scriptural church discipline.

Ya I agree with you. I think what I saw was rare. I asked our District Supervisor: "How many of these have you been to" and this was his first! He told me that many of the guys just walked away and never went through the process.

Can't wait to see you for graduation!