When Charity and I were dating I took her to sushi for her first time ever...

I had this amazing date planned where we would go to my favorite (most expensive) sushi place.  I saved up so we could go there.  I made sure we went at just the right time to miss the crowd.  I ordered all my favorite rolls for her to try.  She took one bite and literally spit it out.

That was tough to deal with. 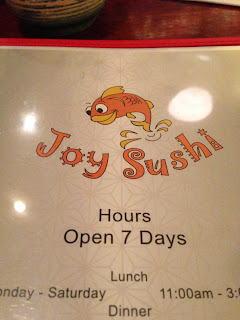 Now that we have been married for almost eight years Charity has learned to find a few items on the Sushi menu that she enjoys and we have had some great dates!  In San Mateo we just tried a new sushi spot for date night last week.  The place is called "Joy Sushi" and its in downtown San Mateo (about 10 minutes from our house).

Charity normally doesn't like to eat sushi for date night but since I was preaching for Christmas Eve she made an exception.  The place was pretty good; its not our favorite but its good.  We had been wanting to try it and my dad gave us a restaurants.com gift certificate to try it out!  I give the place credit for having a hilarious logo on their menu.  I think we will go back again to have some more!

Huge thanks to my wife for being adventurous. Big thanks to my dad for hooking it up!
Posted by Neal Benson at 7:36 PM

Pretty section of content. I just stumbled upon your website and in accession capital to assert
that I get in fact enjoyed account your blog posts. Anyway I will be subscribing
to your augment and even I achievement you access consistently fast.