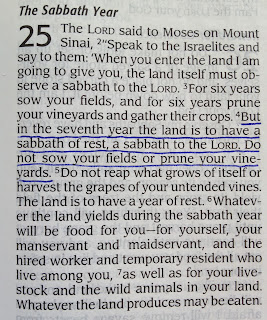 Something that I heard about early in ministry was this spiritual refreshment break called a sabbatical.  Now I had just heard rumors of what a sabbatical was but all I really understood is that it was generally a three month break from ministry (some people took more time while some people took less).  I knew that some guys took it because they were hitting a rough patch and some guys took it because it was part of their church policy.  I had seen some pastoral staff leaders take a sabbatical but it still didn't register in my mind the need for it and the main purpose.  I knew that there were some principles of it found in the Bible but I never took the time to study them since it seemed like something I would never have.

Throughout my time in seminary some of the professors would talk about sabbatical and how to get the most out of that time if it ever was allotted to you.  November 18th marked seven years of leading for me at South Hills Church Community which offered me the opportunity the to take a sabbatical.  Starting on April 26th 2012 I will be out on sabbatical for twelve weeks which will put me back in the office around the middle of July 2012.  Now that I have been in pastoral ministry for over nine years I fully understand the need for a sabbatical and what the purpose of this break is all about.

This is such a huge blessing to me that our church is giving the time off for spiritual refreshment, personal development and time with my family!  The last seven years of ministry have been such a huge blessing to me and I am so thankful for everything that my church has invested into me to help me grow into the pastor I am.  At the same time I am very much looking forward to my sabbatical for some intense spiritual renewal.

Here are some facts about ministry that play into the need for a sabbatical:


Throughout my ministry career I have seen some amazing wins and had the opportunity to grow immensely.  But I also have seen some difficult situations, been in intense conversations, and encountered situations that broke my heart deeply.  My goal is to use this post to prepare our church for my absence during May, June and some of July.  Tomorrow I will write more about sabbatical and how I plan on breaking down the time to get the most out of this opportunity.
Posted by Neal Benson at 10:48 AM

How exciting. I was blessed with a sabbatical after my 7th year on staff with InterVarsity and it was indeed a deep and refreshing time. Have fun!

Thanks Layla! I am so excited!