I did it (finally)

On April 28th 2012 something monumental happened in my life! 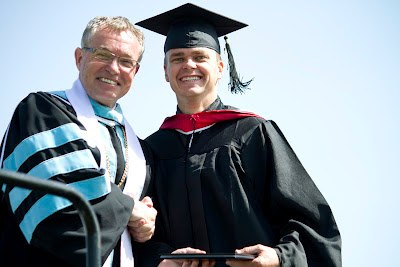 My journey in seminary is totally different than what I expected!  In September 2004 I started working on my Masters of Divinity at Azusa Pacific University's extension program in San Diego.  After taking two course God lead me to Las Vegas to minister with students which put a halt to my studies.  After getting the ministry up and running I chose to go back and work on my degree but now I was heading to Fuller Seminary.  March 2006 I took my first course at Fuller and my time there was amazing!

Once I realized I would not be able to complete the program through Fuller I transferred to a new seminary in Northern California called Tozer Seminary.  That was the most enjoyable, difficult, time of my life.  Seminary stretched me, shaped me, frustrated me, challenged me, gave me new friends, took lots of time, and encouraged me (Did I mention that I started Seminary as a single man and graduated a marriage man with two beautiful daughters?).  After three years at Tozer I graduated on April 28th 2012 with my Masters of Divinity; this is one of the top ten happiest days of my life!

I have referred to Seminary as the modern day discipleship process in my life; I needed Seminary in my life.  There were times that I wanted to quit but it shaped my Theology.  It helped my understanding of Scripture.  It provided a route to learn the Biblical Languages.  I wish that every new Christian would take the time, make the commitment and go to Seminary so that they can grow in their knowledge and love for Christ.

Seminary taught me how to think Theologically.  It helped me understand Scripture in a new way and make it understandable to the world around us.  My heart breaks for the lack of Biblical literacy in our society and I feel that God has called me to help combat that; I think Seminary has helped prepare me for a life of that.
Posted by Neal Benson at 3:43 PM