For the last five(ish) years I've been wanting to get a tattoo on my left arm. When I say "a tattoo" I mean a half-sleeve.  I am not one to simply rush into a tattoo. I know its something on my body forever and it matters. I have tried to find an artist near me but each time I think about calling I just think: "I want Jonny to do the tat."

Jonny Five is my buddy in Vegas who has done basically all my ink in the last decade. I've spent many hours with Jonny and more importantly I trust him. He's a fantastic artist. He's well respected. He knows what he's doing. 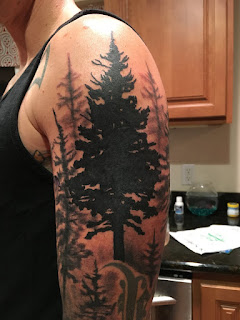 About six months after that I began thinking of getting a tattoo to remind me of that time. Each time I looked at trees I couldn't find the right one. After thinking about it for almost four years Charity and I were talking and it all clicked. I don't remember how the conversation went, but it was finally clear that I needed to get a pine tree (or some kind of mountain tree). It would remind me of my roots and the time in seminary.

The tattoo also makes me think of Psalm 1 where it says this: 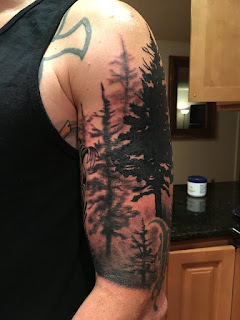 Psalm 1:1-3
1 Blessed is the one
who does not walk in step with the wicked
or stand in the way that sinners take
or sit in the company of mockers,
2 but whose delight is in the law of the Lord,
and who meditates on his law day and night.
3 That person is like a tree planted by streams of water,
which yields its fruit in season
and whose leaf does not wither—
whatever they do prospers. 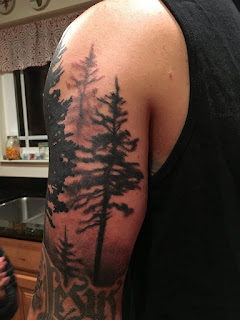 I love the dimension in the tattoo and the variety of trees. The main tree is dark black and then the trees vary from there. If you're familiar with Redwood trees you might know that they don't have deep roots but they have connected roots. The tree relies on its root connection to other trees in strong winds. This tattoo also reminds me of the need to stay connected with others. The Christian life is not meant to be experienced alone!

There are the four reasons this tattoo is so meaningful to me. Thank you Jonny for a great piece! If you're ever in Vegas go hang out with Jonny and get the tattoo you've been thinking about for years.
Posted by Neal Benson at 12:08 PM

Hi there, I think your blog might be having web browser compatibility problems.
When I take a look at your site in Safari, it looks fine but
when opening in Internet Explorer, it has some overlapping issues.

I merely wanted to provide you with a quick heads up!

Apart from that, wonderful blog!

this is great do you mind if I share it?