The Grandson of an Immigrant

In the 1900’s my grandmother immigrated from Germany to Los Angeles. She came over to take care of her aunt. She was only a teenager but her parents knew a better life waited here for her. She lived in a small German community in Los Angeles. In this community Maria Kraus met Julius Hettler. They were married and had two children: Irene Bertha and Rosemary.

When their children were little they moved to Big Bear Lake, CA. One day Julius and Rosemary were driving up the hill to their home. A drunk man, who had been skiing at Snow Valley, pulled out and t-boned their car. Rosemary didn’t survive the accident and the parents experienced a period of depression. Their second daughter, the younger one, was left to pay the bills and keep the family going.

Irene later went to college, her parents grieved the loss of their daughter but pressed on in life. While in college, Irene met Don. They eventually got married and had two children: Beth Marie and Neal Charles Benson. The marriage lasted around ten years but divorce was in the future. 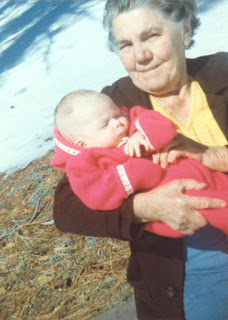 I am also reminded that God’s word tells me I am foreigner traveling in this land. This land is not my final home. This life is but a vapor compared to eternity. Abraham was an immigrant and God gave him some land.

Before any of us start judging immigrants I think we need to look to our roots.
Posted by Neal Benson at 7:30 AM