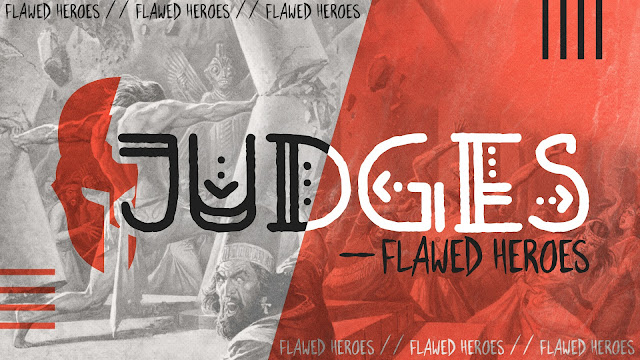 Our church is doing a twelve-week sermon series through the book of Judges called: "Flawed Heroes." We are studying the Old Testament book for a couple reasons. One is that Judges is a book of flawed heroes and none of us are perfect. The book reminds us that God is the divine hero of the story. Judges is a period of transition for Israel, a transition from God as their leader to a monarchy. For this series I volunteered to write the small group questions that go along with each sermon. It seemed like a waste to leave them in a file on my computer and not share them with everyone.

Israel experienced forty years of peace after Deborah but fell back into their old habits of sinning. For seven years they were oppressed by the Midianites. The Midianites would come and raid the land of Israel; stealing food and livestock was a normal occurrence. God called Gideon to be the next leader. Through a series of God-inspired events, we read that God give Israel the victory over what scholars think to be an army of 120,000+ soldiers. Initially Gideon was a humble servant but the battle went to his head and he became prideful. The end of his life is a disaster; he is worshipping the false gods he torn down and making a golden ephod for worship.
1) Think about a time in your life when you felt oppressed by external circumstances; it could have been a school project, a demanding supervisor, an unwelcome family addition or more. How did God show up when you needed Him?
2) Read Judges 6:25-32. Gideon obeys the command of the Lord to tear down the altar to the false gods his tribe has worshipped. What are some false gods that we currently fall into worshipping in our culture? How do we eradicate them?
3) There are times we can follow Gideon’s lead in being faithless to God (read Judges 6:33-40). Do you think it pleased the Lord for Gideon to put God to the test in this way? Have you ever laid out a fleece for the Lord to answer a prayer?
4) Thinking about you prayer life, where do you need God to act in a mighty way? Read Luke 18:9-14 and talk about the difference in the two men that Jesus illustrated. What can we learn from this story about prayer and God listening?
5) Gideon finds out that his army is too big for God to use. Someone once said we have everything we need to accomplish everything God has called us to accomplish. Where have you lacked faith in trusting that you have all you need right now?
6) Read Judges 7:19-25. It was obvious that God had given the Midianites over to Israel. Why do you think Gideon had the people shout his name when they smashed their jars? Where do you look for praise from others instead of looking to God?
7) The conclusion of Gideon’s life is a sad event. He returns to idol worship (read Judges 8:25-27). The story has a thread that reminds Israel of Aaron and the golden calf (see Exodus 32). How come we are so quick to turn back to idols?
Close your time in prayer. Talk about who you will invite to Coastline this week
Posted by Neal Benson at 11:54 AM