This morning we woke up in Tel Aviv, loaded the bus, and began our travels. It's amazing being in Israel. I’m writing notes on my phone and then improving them and posting them here. Some immediate thoughts from the morning are:
The region reminds me a lot of California
The sun is shining bright
The Mediterranean Sea is gorgeous! 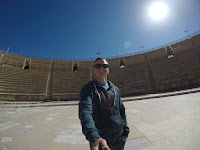 Our first stop was to Caesarea. We started our time here by watching a short 10 min video to help us understand what occurred here. This is the port city that was built by Herod the Great in honor of Caesar Augustus. Herod built a massive sea wall to create a harbor port that was safe for vessels to travel. The wall eventually fell and the city was occupied by more of a Roman culture.

The city experienced a great turnover in leadership. Once it was occupied for the Jewish people, then the Muslims and even the Christians. The city has ruins of an amphitheater that has been rebuilt for modern use. The acoustics in the place was great!

We also walked on the Mediterranean Sea and saw the palace of King Agrippa. This is where it’s thought that Paul addressed Agrippa in Acts 25 before being sent to Rome to face trial. 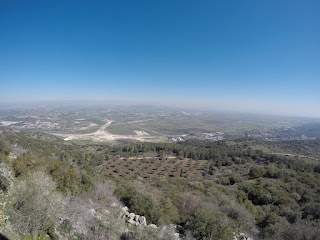 Mount Carmel is famous for the encounter between Elijah and King Ahab. Sometimes people will it call it the showdown between Elijah and the prophets of Baal. On this mountain Elijah defeated the prophets of Baal in an epic battle. The Lord had withheld rain on the land for three years because of the sin of idolatry. Israel had followed the evil ways of their king and disobeyed the Lord.

Its amazing to stand on top of this mountain and think what happened here. From the mountain you can look to the West and see the Mediterranean Sea. Then if you look to the East you can see the Jezreel Valley. The Jezreel Valley is where Ahab would have traveled after this epic battle. From what our guide shared this is also where Gideon would have fought the Midianites.

This isn’t the only battle recorded in Scripture that took place in this valley. If I remember correctly, Saul fought a battle here and so did King David. After leaving Mount Carmel we traveled for our lunch break.

This site was unfamiliar to me from Biblical accounts. Our guide spoke more about what happened here. It’s a small hill in the Jezreel Valley that would have been a great outpost for the Israelites. They are currently working on archeological excavations on the site to determine more of what happened there. Some think that both Solomon and Ahab had a palace here.

The hill is layered with different societies from different time periods. As they are excavating they have found two different city gates. This means that once city would have been laid waste and many years later another group would have rebuilt. 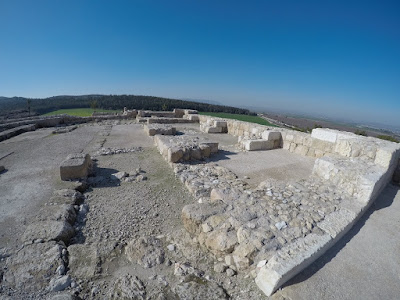 At the end of our time we walked down a large stairway to an underground spring where people would have gathered water. If I can upload the video to youtube I will post it and link it here.

Our final stop of the day was the Sea of Galilee. As you can see Israel is not a large land. You can also see the area is packed full of history. The locations where these things took place are so close to each other! We drove about an hour, in traffic, to The Sea of Galilee. Upon arrival we went right into the location that holds a boat that was found 30 years ago. 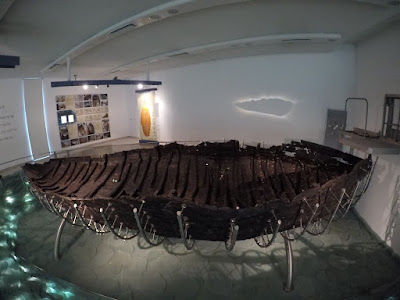 It took ten years to restore because it was so waterlogged and needed special treatment. It was a fantastic sight to see. I was awestruck looking at this boat. I could barely speak as I took this whole experience in.

At the end of the day we traveled to our hotel. Tonight we’re staying in Tiberius and will travel around this area for the next two days!
Posted by Neal Benson at 12:32 PM