This morning we prepare for our archeological dig. I've been told that most people will find something on this dig! The drive is about an hour from our hotel. It's been so wonderful getting all this time with Charity!

On our drive we briefly stopped by Bet Shemesh. This is the location where the people were working in the fields when they saw the Ark of The Covenant that was returned by the Philistines. Bet Shemesh is a very important city that was given to the Levites. It was a border town between Dan and Judah. 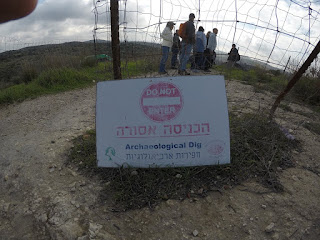 One thing we're doing while here is participating in an archeological dig. This part of our trip takes place in Bet Gurvin national park. We stopped here to pick up an archeologist who is helping to give us info on the trip. She said that our stop here is in the most beautiful time of year! The weather is great, the hills are green and the sun is shining (mostly; we've had some rain). It felt great walking past these signs on our way to the dig.

In Israel they have found over 35,000 unique archeological sites. We're in the area of Maresha. I wasn't sure what this part of the trip would be like. There have found 5000 caves in this area. 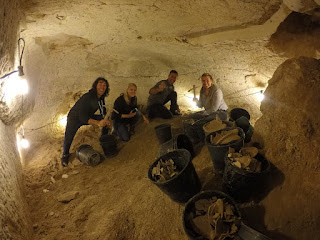 We participated in a legit archeological dig here! Rob found a bowl. Abby found a bowl. I found a brick. Charity found pot shards. Jim found a pot handle. Mark found a big brick. It was so cool. I think everyone in our group found something.

After our dig site we went to another cave system that hasn't been excavated yet. It was very interested to see this area and what life was like. From what they've found they can tell the people are very wealthy. They have different kinds of pots. They've found perfume jars. In the cave, we walked, there is a room for raising pigeons. 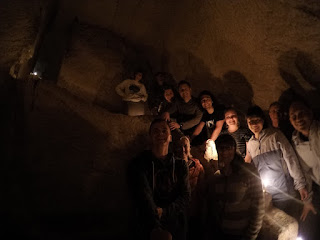 If you have a chance to visit Israel I would put this stop high in your list. It was totally worth it! At the end we were allowed to take pot shards that won't fit any of the bowls or pieces they have. In the caves you can't take anything, it would be stealing from the Israeli Antiquities Authorities. 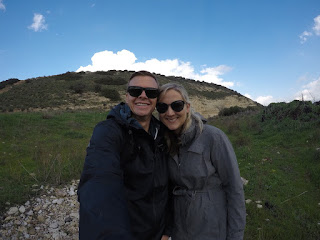 On our way back to Jerusalem we stopped at the Valley of Elah. It's a beautiful valley with two small hills on either side. The hill on the west is a little larger and the one on the east a littler shorter. Near the shorter hill there is a small stream. The stream was empty at this time of year so we grabbed a few smooth stones.

This location is best known for the battle between the Israelites and Philistines. You can read this story in 1 Samuel 17. It's most famous for the battle between David and Goliath. The Israelites are perched on one hill and the Philistines are on another hill. There is a shouting match and David finally accepts the challenge from Goliath. David doesn’t go because he thinks he can defeat the champion, he goes because he knows will defeat him. 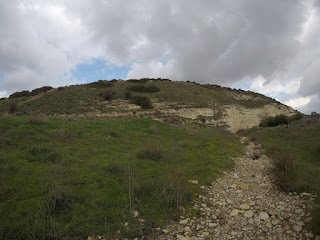 We read the story of David and Goliath while here. You can picture David coming down to the stream and picking up the smooth stones. The story says that he picked up “five smooth stones”. Some believe that Goliath had four bothers, others think that David just wanted to make sure he had enough ammo incase he missed the first time. After we read the story, Liam and I ran to the top of the hill to get perspective of what it would have looked like.

The valley is beautiful. It was all green and lush. The valley is so lush, they are now growing crops down in the middle. I can imagine the two armies staring each other day for all those days. I can imagine the Israelites sitting on the hill and wondering what the outcome will be. If they allow the Philistines to win this battle, how much more of their land will they take?

Our final stop for the day for the Israeli Museum. We spent about two hours here. I heard someone say: “You can take three days and still not see everything here.” Our main focus was two things: We saw the replica of Jerusalem and the scrolls found in the caves of Qumran. 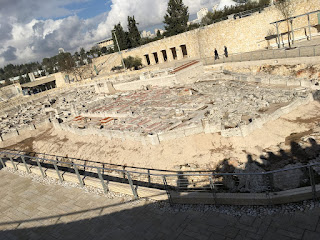 The replica of Jerusalem is not a small replica. I would say it’s at least 75 feet long. It encompasses the different time periods of Israel. You can see how small Jerusalem was in the time of David and how it expanded afterward. There is a replica of the Temple that King Solomon built. You can see the wall that Hezekiah built. It is amazing to think that someone recreated this. How come it’s amazing? Because the man who did this was not allowed in Jerusalem because all Jews were evicted from the city at one point (I missed the date). He did it from memory and books!

The next stop was the scrolls found in the caves of Qumran. The scrolls were saw were fragments that had been preserved. There is a facsimile copy of the scroll of Isaiah that was found. This was most interesting to see.

After our journey today we came back to the hotel to rest. We’re putting in some walking miles. I can’t believe we only have three days left here!