This morning we packed our bags and said goodbye to the Sea of Galilee. I had a great time visiting this region. As the morning began Charity and I were able to FaceTime our kids right when we woke up. It did my heart good to see my daughters smiling and happy. Isaiah was asleep but he's doing good too! 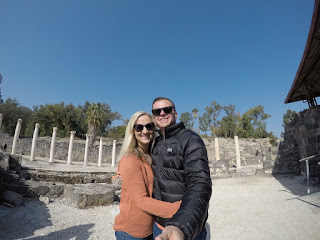 Think Beth Shaen from the Bible. This is where King Saul's body was hung after he died in battle. You can read this story in 1 Samuel 31. In King Saul's time, the city was on the hill. It wasn’t the larger Roman city that it became later on.

As the city grew it became Roman territory at some point. Historians think that from 69 BC to 749 AD it was a growing city. The city was destroyed in a great earthquake during the Israeli earthquake of 749 Archeologists are currently restoring the city and rebuilding it with what they’ve found. They have uncovered a huge footprint of the city that includes a: Roman Bath, Hipadrone, theatre and amphitheater.

This location would have been a Roman city in the time of Christ. It's highly unlikely that Christ would have ever visited this city because of the lifestyle of the Romans. There would have been nudity in the Roman Bath, death in the Amphitheater and licentious behavior.

Today, while we drove from location to location, we saw a handful of sites. The first thing to catch my attention was the Jordan river. We would later visit this amazing river.

We also saw sheep and shepherds. Most people might think: "what's so special about that?" For me it was great to see shepherds still here. I saw herds of sheep with men watching them. It reminds me to King David and his childhood. It made me think about how boring it would be for a young man. He has no phone. No text messages. No Instagram. He sits outside, alone, with no phone and watches the sheep. It looked a little like babysitting but the sheep can take care of their themselves.

The third thing I saw that caught my attention was caves in the mountains! I thought about David hiding in caves and running from Saul. I'm not saying that happened on the road we drove up north but it made me think. It made me think about sleeping in a dirty cave in the side of the hill. There is no restroom in the cave. No running water. And honestly it seems sketchy!

I did see, what I thought, was a couple caves that were lived in. They looked like they had a large mouth at the entrance to the cave. They have a cover over the mouth of the cave. What a tough life to be a shepherd living in a cave. There were articles outside the cave that made me think families are living in them. I’m still processing what that must be like… 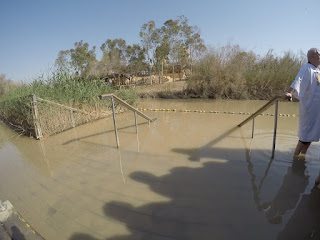 We're pulling up the Jordan river right now. Israel has stopped up the Jordan River at the Sea of Galilee but it still has some water in it. The water is cold and dirty. There are three major events, from the Bible, that happened at the Jordan river. This first is the Israelites crossing the Jordan as they entered the Promised Land (Joshua 4). The second is when Elijah strikes the river with his cloak and it parts in half (2 Kings 2). The final event is the baptism of Jesus (Matthew 3).

I was surprised to see how many people were being baptized at the river. Some were being sprinkled and others being dunked. I’m not going to make a point on what way to be baptized in this post, but focus on the fact of people following the example of Christ. It was refreshing to see so many people being baptized. I’m not sure if it was a first baptism or second but they are following Christ! 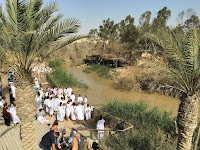 The final thing I noticed here was how Jordan is on the opposite side. If you jumped in the river and swam for 10 seconds you would be in a different country! There were guards, on the Israeli side, to help keep safety. Our guide told us not to jump in and scare the guards. It was an interesting sight to see. 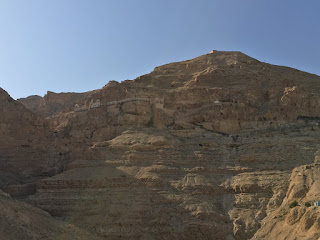 After leaving the Jordan we went to the Mountain where Jesus was tempted. Immediately after being baptized, Jesus heads into the wilderness where He is tempted (You can read the story in Matthew 4). It's a large mountain where the story is thought to take place. There are caves in the side. It's a dry mountain with little life on it.

The life at this mountain is people who are walking up and down to see the sight. At this site we took some time to just look at the mountain and immerse ourselves in the story. It was quite a site to see this location. This is also the location where the spies from Joshua would have fled after leaving Jericho. My friend told me I would be surprised to see how close things here took place next to each other; he was right. 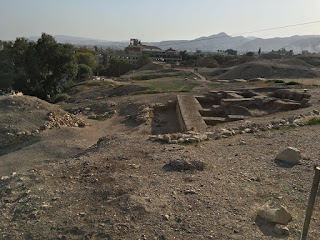 Our next stop was the city of Jericho. There was a sign that said: “Jericho, the oldest city in the world.” I can’t vouch for the sign but makes you think. We stopped at the location where it’s believed the battle of Jericho occurred. I was trying to image what the land would have looked like with no buildings. What would it have felt life for Joshua, and his men, to march around the city. Where would they have returned to after each circle around the city?

The city is a modern city now with buildings, hotels, cars and people all around this location. There are doing archeological digs to find out more about the site, who inhabited it and how they lived. 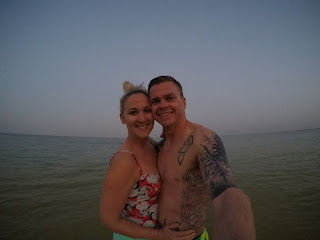 By this point of the trip I was super tired! We got into the bus and drove to our final location, the Dead Sea. I’ve heard stories about this place but never imaged how cool it could be. It was nearing night so we put on our trunks and headed down to the beach. The Dead Sea is high in salt content. So high that no plants or animals can live in it. There are no fish in this sea. It was weird to see a body of water, so large, with no one fishing it.

We had our fair share of laughs down here with our good friends. We floated. Smiled. Took pictures and laughed more. No matter how hard you try, you float. You can stand straight up and you float. It’s crazy!  I was super thankful for my GoPro and being able to bring it in the water with me. Now I did keep it above water because I wasn’t sure how bad the water was for it.

Our guide gave us some information about the Dead Sea. It has dramatically receded in the last 50-60 years. There is little water emptying into the Dead Sea. Also, it is dead because it doesn’t let out any water. It’s the lowest place on planet earth sitting 1400 feet below sea level. That is astonishing to think of. It has it’s own ozone layer down here. 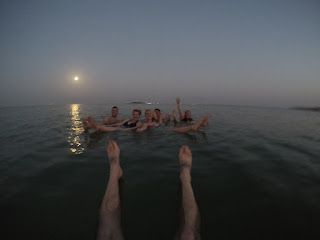 What a great day we had! I’m exhausted and it’s time to get to bed. Hope you enjoy what I’m learning.
Posted by Neal Benson at 8:00 PM