Lent- What I'm giving up

Many people know that today is the first day of Lent. Now in all honesty, I'm not much of a Lent person. It probably comes from my lack of understanding of the season of Lent. I did a quick Google search and learned that Lent falls in the Christian calendar, that is good because I always thought it was more of a Catholic tradition. 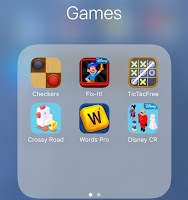 This year I'm giving something up for Lent. My goal is to be on my phone less. This will come in the form of not going to the folder on my phone titled "Games." The reason for this comes from I find that I can easily check out by sneaking to my phone and playing a quick game. That turns into 5-20 mins on my phone playing games. I'm really hoping to be more present in this time and connect more with God instead of being on my phone as much.

One year for Lent I gave up social media and I was thinking about doing that again but wanted a new challenge. I was joking with my wife this morning about what I'm giving up and said: "Well I guess I'll be watching more on YouTube." I really hope that it doesn't end up that way. It will be an intentional process for me to avoid what can be such a quick habit.

I look at this period of 40 days to similar to a fast. I've never fasted from food for 40 (but I would like to). I have fasted from food for 3 days before and it was tough. It is a mental disciple. When I think about fasting its a time to abstain from something to focus more fully on God. It's a time to give up something, not to just give it up, but to use that time to connect with God. That is my hope during this season of Lent.

Are you giving anything up?