We woke up this morning to some light rain. It’s crazy to think this is our last full day in Israel. We have experienced so many different things. This is my first visit to the Middle East. If you ever get an opportunity to come visit you might think that much of the area looks like California. That was my same thought. There are also times it has reminded me of Europe (especially Italy). It’s been a wonderful trip, it’s been the trip of a lifetime! 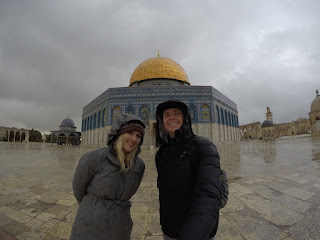 Our first stop today is to stand on the location where Solomon built the Temple to the Lord. The original Temple was destroyed by the Assyrians when they conquered Jerusalem around 700 B.C. The Temple was rebuilt (I think by Nehemiah, but I might be wrong). If I understand correctly, the location was expanded by Herod to the Temple Jesus would have visited. The second Temple, what our guide kept calling it, was destroyed around 70 A.D. when the Romans conquered Jerusalem. I don’t think the Temple has ever been rebuilt.

The people of Israel are allowed to come here whenever they would like. But the Rabbinical priests don't encourage them to come because they know don't where the Holy of Holies is located. In Jewish law only one person is allowed to enter the Holy of Holies and they don't want to accidentally step there. Therefore many Jewish people have never visited this location.

The Muslims did build the Dome of the Rock on this exact location. They, the Muslims, believe this is the place where Abraham came to sacrifice Esau to the God. This is the same story that you find in Genesis 22 but the Bible tells us it was Isaac who Abraham brought to sacrifice. Currently the Dome of the Rock is built on this site. From what we learned it's not a Mosque. This is a memorial site for Mohammad. Charity and I went to take a picture here and we were told that we cannot touch each other in the area.

In this same area you can see The golden gate. This is also called the Eastern Gate. It is currently closed with rocks. The Bible tells us that Jesus will come through this gate when He returns. The Muslims don’t want Jesus to return so they have piled it up with rocks. To make it even more difficult, they have buried people in front of the gate. From what I understand, the thinking is that Jesus would never step on a grave. The dead bodies are to deter Jesus from returning in this manner. 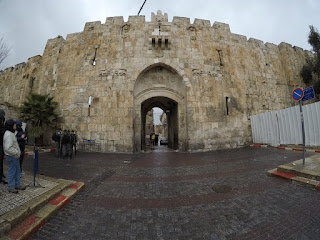 After existing the Temple Mount we stopped briefly at the Lions Gate. This is one of the many gates a person can use to enter the city of Jerusalem. Solomon is the one who originally constructed the lions gate. This is not the exact gate that Solomon made. Another name for this gate is “Stephen’s Gate”. The gate this secondary name because it is believed this is the gate Stephen was taken out of to be stoned in Acts 7:54-60


When the members of the Sanhedrin heard this, they were furious and gnashed their teeth at him. But Stephen, full of the Holy Spirit, looked up to heaven and saw the glory of God, and Jesus standing at the right hand of God. “Look,” he said, “I see heaven open and the Son of Man standing at the right hand of God.”
At this they covered their ears and, yelling at the top of their voices, they all rushed at him, dragged him out of the city and began to stone him. Meanwhile, the witnesses laid their coats at the feet of a young man named Saul.
While they were stoning him, Stephen prayed, “Lord Jesus, receive my spirit.”Then he fell on his knees and cried out, “Lord, do not hold this sin against them.” When he had said this, he fell asleep.


The Pool of Bethesda 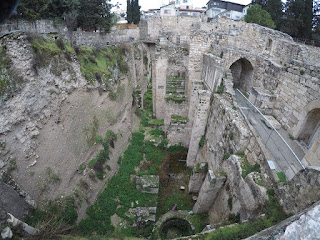 We continued moving around the city. Our next stop was defiantly more cheerful! We came to the location of the Pool of Bethesda. This is the lowest point in the city of Jerusalem. There wasn’t any water in the pool and it is basically an archeological site today. You can look down but can’t enter it. This location is about 100 meters from The Temple location. So people would be worshipping near by while invalids were hoping to be healed. If you have some time read John 5:1-9 to learn more about the pool. 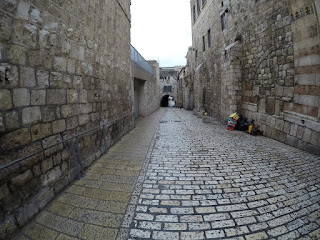 We walked the Via Dolorosa. You may have heard of this street before. Via Delarosa means “the road of suffering.” It's the path Jesus would have walked as He went to Golgotha to be crucified. The road has fourteen stops (some say fifteen). We stopped at each place except for the ninth stop. It was so much to take in. I wish I could share with about each stop but you’d get bored and stop reading, so let me share just two or three.

The stop that sticks out most to me is where Jesus met Simon in Cyrene. I think this was either stop four or five. At this location there is a rock on the wall. History tells us that at this location Jesus became weak and almost fell. He touched His hand on the wall to brace Himself. Charity and I each touched the location where it’s said that Jesus touched.

The other stop that sticks out to me is where Jesus was crucified. I’ll write more about that location in the next section. At this location there are three stops, maybe four, right next to each other. The stop where Jesus would be nailed to the cross. The stop where He would be raised on the cross. And the stop where he would be taken off the cross. These three stops are ten feet from each other. It was overwhelming just being there. Writing about it makes me all the more grateful for what Jesus endured for my sin.

The Church of the Holy Seplica 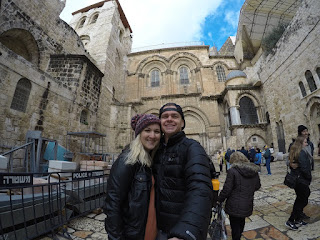 This church was built on Golgotha. Golgotha is where Jesus was crucified. My first thought was; “This ruins a perfectly good location” but what do I know. In reality it preserves the location. By building the church here it claims the ground so no one else can build here and ruin the site.

The church also covers the tomb where it's said Jesus was buried for three days. It was once a garden and now it's in a huge church building. I wish we could see what this place looked like 2000 years ago. I’d love to have an opportunity to see what this location looked like before the church was erected. It would be cool to see the rock, to see the grass around, to see the landscape. Thankfully it doesn’t matter for my faith. It matters that Jesus did this for me.

While here we stopped at a location where people would have buried. The tomb we saw holds two people, next to each other. We are not sure if Jesus was placed in this grave, history tells us not. There was a line, about an hour long, where you can walk into the tomb that is said to be where Jesus was. We didn’t do this part but I bet it was awesome. 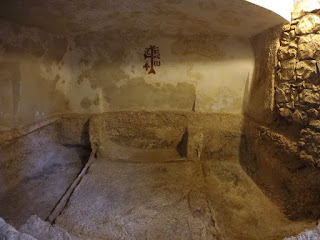 After lunch we went to one last location. It’s called the Garden Tomb. Now with all I just wrote this is going to be tough to get so bear with me. In 1860 the owner of this site discovers a tomb. When the Biblical knowledge is taken into account there are thoughts that this is where Jesus was crucified and buried. Knowing this, in 1894 the Garden tomb association purchased the site.

The site is really what I think the crucifixion of Jesus would have looked like. This location is north of the wall of Jerusalem. Our guide, for this portion, had great information about the site, what would have taken place here and Biblical knowledge.

It’s tough to really know what site is the real site. I can see great information for both of them. This location has what looks to be a skull in the background. This would fit with Golgotha and death. You could see a great garden and there is a tomb cut in the stone. We actually were able to walk in this tomb.

In the end, I’m thankful that Jesus died for my sins. It’s overwhelming to think about what He did for us.
Posted by Neal Benson at 6:07 PM

Enjoyed reading your adventure! How neat for you to go through this trip and experience. You know, when I first looked at the first picture in this post....something looked "off" to me. It is because you and Charity are not touching and so far apart!! I understand why you had to be apart but it didn't make sense till I read it. LOL See you guys soon!