This morning we woke up and looked at the Dead Sea. We decided to go and take another float in it before we left. As we rushed to our our suits on we ran down the shore as the sun was rising. It was a gorgeous sunrise, the water was cold but the company was great.

Our adventure today begins in the south of Israel and we will work our way to Jerusalem. The first three spots we're visiting today are all in the vicinity of the Dead Sea. From each of these locations I've been able to see the Dead Sea. 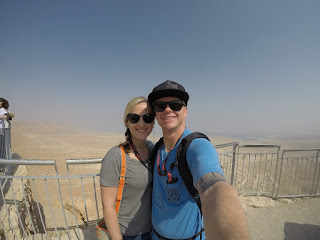 Once on top we walked around the city. It's a very large ancient city. It has a double wall to help keep the city safe. If I understood our guide correctly, the wall was built by Herod the Great. The location was used as his winter home. We saw the remains of his winter home and it was very elaborate.

The city has large store rooms. They would have carried: wood, food and supplies to the store rooms. Herod wanted to store enough food there to survive for 1000-2000 years. He created a sophisticated system to gather flood water for the city. 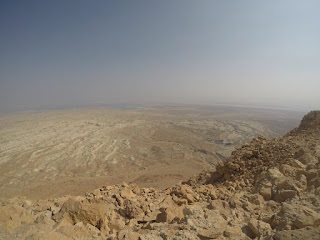 After the fall of Jerusalem the Romans came and attacked the city. They encamped the city, built a wall around it (on the ground) and  started to advance. They took seven months to build a ramp to the city so they could tear down the wall.

After tearing down the first wall they found the second wall. Hey continued to tear this wall down. The Jewish people built a third wall, out of wood, and the Romans set fire to this wall at night. They waited to attack until the morning.

The Jewish people gathered that night to discuss their situation. A well respected man suggested they all kill their families and then kill each other so they won't be captured by the Romans. The men agreed and followed the plan. The Romans came in the morning and found everyone dead.

This story breaks my heart. It was tough to hear what happened at this location. Although we have a beautiful site it came at a huge cost. 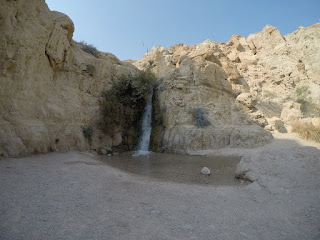 Where we visited today is where David was held up in a cave while he was fleeing from King Saul. We don’t know what the exact cave is and that is ok. There are many caves in this area. The area also has two springs and a few waterfalls. We stopped at the first waterfall on our walk. It was such a great sight to see; a waterfall in the desert! I crossed the stream to touch the water and it was cold. Another surprise for me.

This area seems to be full of wildlife. It makes sense with their being a spring here. We saw a unique rodent that I’ve never seen before. I shot some footage and will try to edit it one day. As we turned into this place we also saw what our guide called a deer. It wasn’t like the deer I’m used to seeing. I would have called it a goat based on size and horn shape. 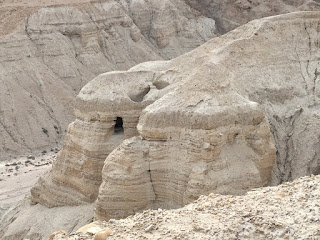 Our next stop today was Qumran. There is way too much for me to write about this location. This is the famous location where in 1947 a young shepherd was tending the sheep. A sheep was frightened and ran into a cave. The shepherd was lazy and instead of going in to help the sheep he began throwing stones into the cave. Stone after stone and then he heard a unique sound, the sound of a clay jar breaking.

The sheep came out and he returned the flock back to his home. Later that day he returned with his cousin and found the scrolls from the jar. The scrolls are believed to have been written by the Essenes who once lived in this place. The first scrolls were found in 1947 and you can read more fully about them, by someone more qualified than me, on the internet.

What I can say is that since this day, there have been over 900 scrolls found in this region. There is also an archeological site where they have discovered the location of the Essenes community. The Essenes would have copied the Old Testament scrolls and it seems they hid them in the caves. 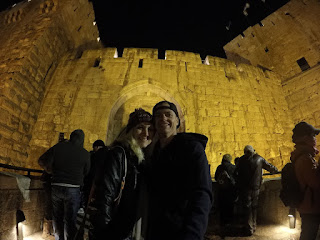 Our final stop today was Jerusalem. We had a long day and I’m exhausted! I’m looking forward to learning more about Jerusalem as this will be our home for the next few days.

I did learn something new on the drive here:
The western side is the Jewish side and the eastern side is the Palestinian side. The city has long been divided. I don’t know too much about this part of history but am looking forward to learning more.
Posted by Neal Benson at 9:11 PM