This morning I woke up to the sound of the Sea. It was the Sea of Galilee. I saw it at dawn and the sun beginning to rise over the Golan Heights. After breakfast we loaded into the bus for a full day of travel, sight seeing and being in awe of this beautiful land.

Some facts our guide shared about the Sea of Galilee: 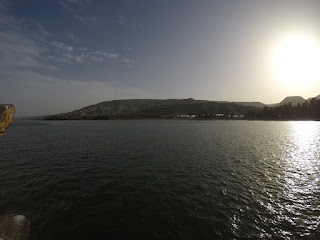 It's hard to explain all my thoughts from standing on the lake, it's going to take time for me to process them. As I stood there I thought about Jesus walking on water, I thought about the feeding of the 5,000 that happened right there and about how much of Jesus' public ministry took place right in this area. I didn’t speak much on the boat ride (that is odd for me) but simply thought about the area. It made me think about my own walk with Christ and how this trip is strengthening my faith and encouraging me.

After being on the Sea of Galilee we went to Kursi. This is the location where it is believed that the demon possessed man met Jesus (Mark 5:1-20). The location has the ruins of a monastery that was built in that area. The exact area is unknown but you can see how they are close to the correct spot. The hills are steep and I could imagine seeing the pigs rushing down into the water. Unfortunately the water is much lower today than it was 2000 years ago so this changes the entire layout of things. 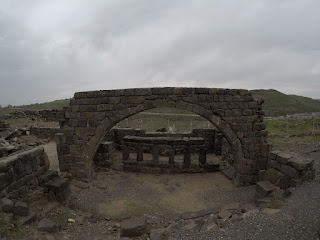 Just north of the Sea of Galilee sits Korazin. This is a town where Jesus visited and was saddened by what He saw.


Then Jesus began to denounce the towns in which most of his miracles had been performed, because they did not repent. “Woe to you, Chorazin! Woe to you, Bethsaida! For if the miracles that were performed in you had been performed in Tyre and Sidon, they would have repented long ago in sackcloth and ashes. But I tell you, it will be more bearable for Tyre and Sidon on the day of judgment than for you.
Matthew 11:20-22 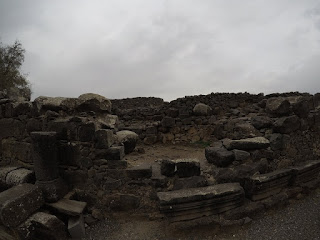 It was hard for me to picture this town. It was above the Sea of Galilee but I couldn’t imagine living there. It is far from water but the view is spectacular. It could be a great location for farming or a middle spot to stop as you go further North in Israel.

There is the ruins of a synagogue here. The great thing about these locations is there is so much history that it has been preserved. You can walk around these communities and see the ruins and visualize what it could have been. 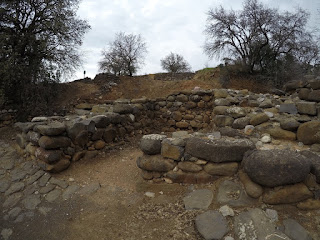 After Dan was given their allotment in Israel they didn't exactly like it. They decided to send a group to find a land more suitable for them. Most of the tribe of Dan ended up relocating to the Northern point of Israel. Their relocation was a snare to them. It open up a door to sin. Instead of closing the door to sin they kept opening it more and more.

This is the location where Jeroboam seduced Dan into idol worship. Their is the remains of a false altar that was meant to be a model of the altar in Jerusalem. Instead of going to Jerusalem to worship Jeroboam created this altar to keep the people of Dan loyal to him. In his attempt to keep their loyalty, he led them away from the Lord. 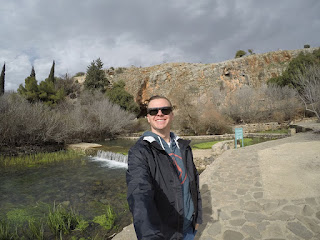 This location is where Peter confessed Jesus is the Messiah. It's located at the very top of Israel. We didn’t visit the modern town here but saw the location, on the outskirts, where Bible scholars think the conversation between Jesus and His disciples occurred.


When Jesus came to the region of Caesarea Philippi, he asked his disciples, “Who do people say the Son of Man is?”
They replied, “Some say John the Baptist; others say Elijah; and still others, Jeremiah or one of the prophets.”
“But what about you?” he asked. “Who do you say I am?”
Simon Peter answered, “You are the Messiah, the Son of the living God.”
Jesus replied, “Blessed are you, Simon son of Jonah, for this was not revealed to you by flesh and blood, but by my Father in heaven. And I tell you that you are Peter, and on this rock I will build my church, and the gates of Hades will not overcome it. I will give you the keys of the kingdom of heaven; whatever you bind on earth will be bound in heaven, and whatever you loose on earth will be loosed in heaven.” Then he ordered his disciples not to tell anyone that he was the Messiah.
Matthew 16:13–20

The Sermon on The Mount 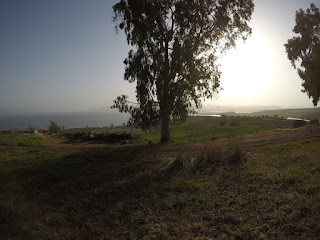 Many people are familiar with this sermon. It was where Jesus gave His first sermon. It happened on the north shore of the Sea of Galilee. We visited the site where it’s believed that Jesus gave this sermon. The landscape would be ideal for giving this message. It’s on a hill and perfectly situated for natural acoustics.

There is also a monastery here and some orange trees super closer. The church on the site was super packed. I could tell there were more Catholic people entering this location by their actions in the building. I was impressed with the dedication and heartfelt worship I saw here.

I really wish we could have spent more time at this location, in fact I’m thinking about going back tomorrow with Charity when she gets here. 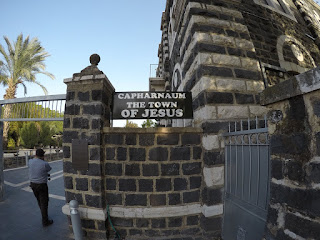 This is the location where Peter’s mother-in-law lived. In an attempt to preserve the home, they built a church above it. I kind of understand the thinking but also think it ruins the location. The original home is in the middle and it’s thought that in the second century the home was expanded to the second wall.

This home was right on the sea. It was also fifty feet away from the local Synagogue. When I read Mark 1 and saw where Jesus was in the Synagogue and  then went to this home I thought the distance was much further. It wasn’t far at all. The water is only another 200-300 away from the home.

The Synagogue has been rebuilt at some point with marble stone. It looks very nice but is still not in perfect shape. The places make you use your imagination to think what they would have looked like.

Overall, today was a huge day! I want to experience more of this place and take more time to take it all in. Writing these thoughts, while they are still fresh, has been very helpful to me! I hope you’re enjoying.

Thank you for sharing your journey with us. I am in complete awe, been doing bible study for the last six months or so and this is so fascinating to me. Amazing!

You bet Beth! I'm so glad to hear you're reading your Bible! What a cool opportunity for you. We sure do miss you!

Thank you for the spelling help!