It's raining today as we begin our journey. It’s not just sprinkling rain but it’s raining. We can’t pray for no rain because Israel needs the rain. We’re hoping the bus to begin our adventure!
On our way we drove around the city of Jerusalem. The city is not super big, it's only 1 Kilometer square. We just passed the Kidron Valley as on the way to our first stop. We're on the eastern side of Jerusalem at this point. 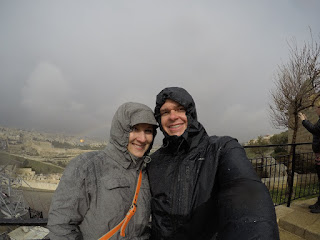 Our first stop was the Mount of Olives. It was tough for me to completely focus here because the rain was falling in my eyes. This location sits on the hill next to Jerusalem. You have a great view of the Kidron Valley, Garden of Gethsemane and the wall. I was trying to image what it would have looked like in Jesus’ time. No homes lining the hillside. No streets winding through the valley. No cars rushing past. I imagined the hills covered with green contrasting the bright blue sky. That is the kind of dreaming I do I rainy days.

The Mount of Olives used to be covered with olive trees. At this time in history it's covered with graves. The people began to bury the dead there and slowly all the trees were cut down. We did see a few olive trees but I imagine there were many more.


Each day Jesus was teaching at the temple, and each evening he went out to spend the night on the hill called the Mount of Olives, and all the people came early in the morning to hear him at the temple. Luke 21:37–38 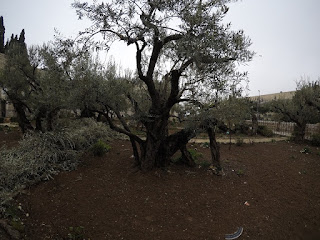 From the Mount of Olives we walked down towards the city of Jerusalem. This is the way, not the exact path from what I understand, Christ would have walked down to the city. Near the bottom we visited the Garden of Gethsemane. The garden still has olive trees flourishing in there. The Olive trees are gnarly. Some have huge bases and you can tell they have been grafted many different times.

Gethsemane is an olive press in the Hebrew language. The word means something to the effect of hard pressed. Learning this in the Hebrew helps to understand what Jesus was experiencing during His final hours on earth. This is the place where Jesus went after the Passover meal. He brought Peter, James and John with Him. He asked them to stay awake while He prayed:


They went to a place called Gethsemane, and Jesus said to his disciples, “Sit here while I pray.”  He took Peter, James and John along with him, and he began to be deeply distressed and troubled. “My soul is overwhelmed with sorrow to the point of death,” he said to them. “Stay here and keep watch.” Mark 14:32–34 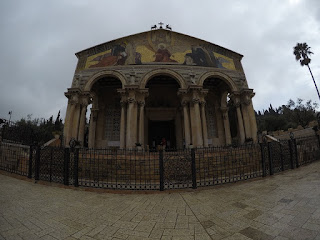 Next to the Garden is the Church of the Nations. From what I gathered it’s a large Catholic Church serving people of all languages. It's a massive church. The interior is gorgeous with all the decorative walls and ceilings. When we entered there was a small Spanish service taking place in the front. The first thing that caught my attention was the sound of a person wailing loudly. I wanted to get a better look at was happening and soon felt like a spectator and not a participant in what God was doing.

We also saw the Kidron Valley from the bus. This is the Valley between Gethsemane and Jerusalem. The Bible doesn’t give us much about location except for one verse:
When he had finished praying, Jesus left with his disciples and crossed the Kidron Valley. On the other side there was an olive grove, and he and his disciples went into it. John 18:1 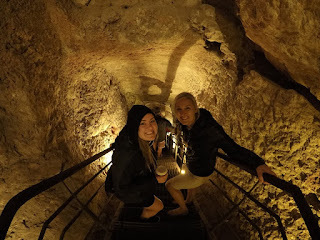 After coming to the south side of the wall of Jerusalem we jumped out of the bus. We walked down to Hezekiah's tunnel. There is a good walk to get to the tunnel; it goes down stairs and stops at some points of interest. There is a dry route and a wet route you can take for the tunnel path. The wet route is about a forty minute walk through a tunnel with an active spring flowing through. There is no light in the tunnel and some spots are as short as 5 and a half feet. The tunnel is about two feet at the narrowest points. I was the rear guard and brought up the back.

As we walked I looked at the walls and thought about the work it would take to create a tunnel like this. The tunnel is not a straight tunnel. It’s quite curvy. We learned that Hezekiah wanted it completed quickly so he had groups start on each end and meet in the middle. It seems to be an architectural feat to accomplish this and they did!

After walking the tunnel we stopped at the hotel to get dry. 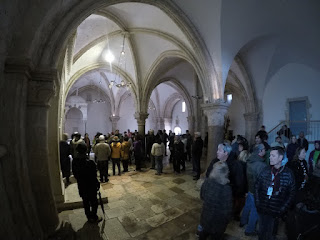 The Last Supper is when Jesus gave us the breaking of bread; what we know as communion. I love imaging what this would have looked like. These men sharing the evening together, celebrating, laughing and listening to their teacher. I would love to see the scene, the looks on their faces and hear the conversation. 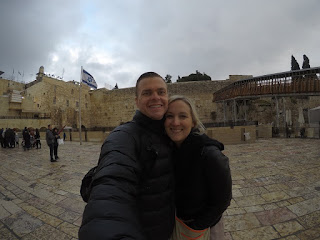 Our final stop of the day was the Western Wall. This location is more commonly known as the Wailing Wall. We took some time to talk about the significance of this wall. It was originally a supporting wall for the Temple. The Temple of Solomon was destroyed by the Assyrians. The Temple was rebuilt but was destroyed in 70 A.D. by the Romans. People from all over the world to pray here.

The wall has two sides; a male side and a female side. Men and women are not allowed to pray together on the wall. I was required to wear a yamaka to approach the wall. I didn’t know what I would pray for as I approached the wall. When I saw it I noticed it’s smooth surface. Before I even touched it I looked to see what others were doing. Some were praying out loud while others stood silent. Some moved as they prayed while others sat.

I touched the wall and was immediately overcome with emotion. I looked at the smooth surface where many others had touched just like me. I thought about how many thousands had been there. I could only thank God for saving me. I was in awe of His presence and tears began dripping down my face. I’m not sure how long I stood there. I could have stayed longer by my yamaka blew off in the wind.

Today was a packed day. It was emotional from the start to the finish. I cannot express how thankful I am for this opportunity!