This morning we woke up in Jerusalem. We've been traveling a ton and starting to feel a little tired. The temperature is much colder here than it was by the Dead Sea. If you’re planning to visit Israel, I’ve heard this is the best time of year. I would rather throw a jacket on than be burning hot! If you’re planning to come and visit here I would say the weather has been great! It did rain a little today but it wasn’t too bad. 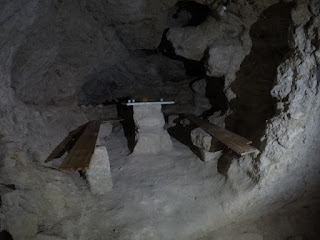 Our first stop was the shepherds field. This is the location where the angels came to visit the shepherds and announce the good news of the birth of Christ (Luke 2:8-18). Now we obviously don’t know exactly where it happened but we had a chance to visit a cave where shepherds would have slept and kept the sheep. The shepherds used to stay in caves. We visited a cave in the ground here. They would bring their sheep into the cave for protection from wild animals. This is also the area where David might have taken his sheep.

It’s interesting that the angel would bring this news to the shepherds. Shepherds weren’t well respected at the turn of the century. History tell us that many of them were slaves. They were considered dirty and lesser in society because of their occupation. Shepherds were chosen because they traveled. This means they would have spread the news to others based on their transient nature of finding food for the shepherd
Used as the social media of that time. 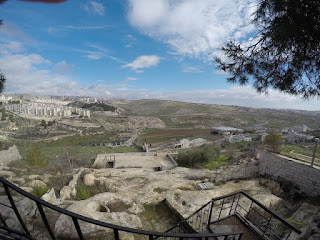 When they went immediately it means they would have left their sheep in the open field or in the cave that night. It was a risk in an area full of wild animals. At that time in history there was lions, tigers and hyena in the area. God protected them as they traveled the 4 kilometers to Bethlehem. It’s different standing in this area thinking it was once considered to be the wilderness. Today it is surrounded by a city but thankfully the area has been protected.

Our next stop was the city of Bethlehem. Bethlehem is most known for the birth of Jesus Christ. Before the brith of Christ there are a few other events that took place in Bethlehem:
- This is where Rachel, the mother of Joseph, was buried
- This is the hometown of Naomi (Book of Ruth)
- This is where Ruth stared in the hit movie, how to find a loving husband (Ruth 2)
- Since Ruth is the grandmother of king David, this is his hometown 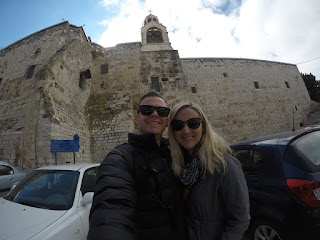 We're standing in The Church of The Nativity right now. The location is believed to be the birthplace of Christ. How do we know this? When the Romans came in the did their best to destroy all areas of Christian worship. They built an altar here and it saved the location from being built over. Basically, the Romans helped to mark out many of the locations that are important to Christ followers.

It’s crazy to think that Believers have worshipped here for over 1500 years. There three different groups that worship here: Armenian, Greek and Roman Catholic. The church is currently undergoing renovations. This is the first renovation that has taken place here in 300 years. 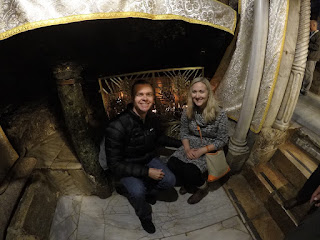 As we walked down to the cave where Christ was born it was a moving experience. This is actually one of the few locations where we have been told “this is where this happened”. Mostly our guide will say: “It happened in this area” or “This is where we think it happened”. While standing in the cave we had a chance to see where Jesus would have been born and then were the manger would have been placed (Luke 2:1-7). I got all misty-eyed thinking about what Jesus did for me! 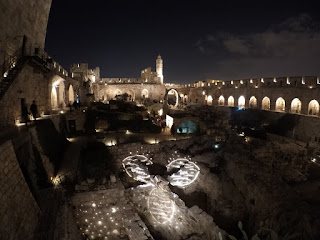 This afternoon we rested. We've been going hard and we were tired. After relaxing this afternoon, Charity and I walked to the Old City of Jerusalem. We looked at shops, did some window shopping and then grabbed a slice of pizza.

After dinner we went to Christ Church. It's the oldest Protestant Church in the city (If I remember correctly). We really enjoyed the service. The entire service used no amplification. The roof is rounded and the acoustics sounded great. Worship was super good and very moving. We went to the 7pm service and honestly I was a bit tired. The pastor spoke about choosing life from Deuteronomy 30:11-20.

We just made it back to our room and it's time to sleep!