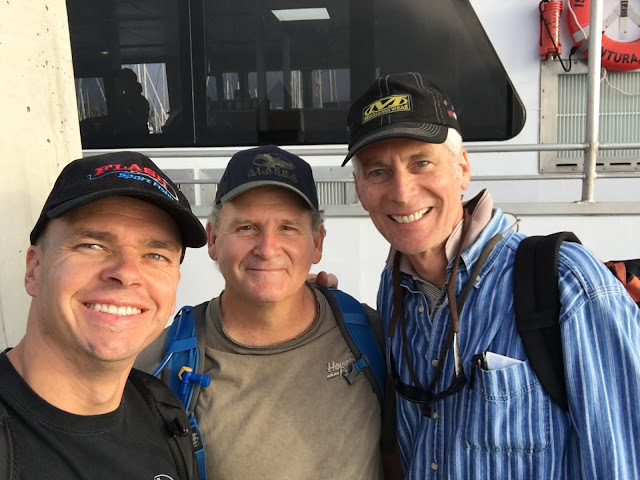 Last week I hopped on a boat from Island Packers and went West to the Santa Cruz Islands. It was an early boat but nothing earlier than other fishing trips I've been on. The boat ride was about an hour and we saw all kinds of marine life on the drive over. We saw dolphins, birds and seals. As the boat slowed to a stop we unloaded at Scorpion Bay. The next step was to pack our gear to our campsite. We wandered up the trail looking for "campsite 9."

With our tents set up we ventured back down to shore to get in the kayaks. Now kayak fishing took much more preparation than I expected. We set sail (if that is what you call it) and began paddling. The ocean in that place is a marine reserve so no fishing allowed. After paddling about 15 mins we were fishing. We basically allowed the swell to slowly push us while we fished the cliffs. I caught four calico bass but none were large enough to keep.

It was getting later in the afternoon and time to head it. We had to paddle, into the wind and waves, for the next 60-90 mins. Just to be clear, this was my first time kayaking and I was not stoked on this part! I used to time to marvel at creation and think of the Native Americans who would have done fishing like this before me. I also thought about the Hawaiians who crossed much worse. I realized I was a wuss at this point.

We made it back to shore and boy was I happy! That night it was back to camp and in bed early. The next morning we were up and off again. This time we would adventure through caves, over kelp and travel to Potato Harbor. The sights were breath-taking. The prayer time was good. And the caves... well the caves scared me. I don't like tight spaces where the ocean is swelling and it can be dark. I'm probably overly exaggerating some of this but as marvelous as they were I was reminded of how small I am. 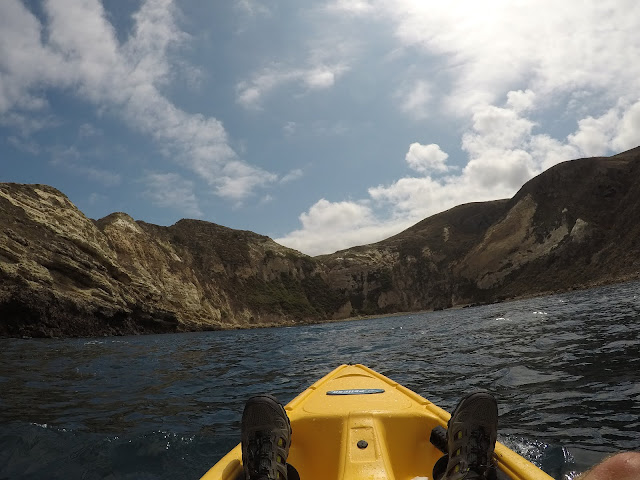 Through caves and into other caves we traveled down the coast. We landed at Potato Harbor for lunch and it was good to stretch our legs on land I threw some lures in the harbor and caught a small sand dap (he was a feisty one). The ocean was getting bigger and I was getting more fearful. I learned something about myself that trip. I had to press through some fears of sharks, drowning and irrational fears from my childhood. It was good that I did.

One of the guys wanted to move down the coast and fish more. Now I love fishing but honestly I was scared of the ocean waves (they look much bigger from a kayak). I had to speak up and decide it was time to head back. I wasn't looking for a fight against the wind again. As we paddled back it was increasing easier than the day before. The wind was at our back and ocean was pushing us. We ventured through another cave or two and I had to pray out loud in some of them.

Looking back it was an amazing trip that really stretched my faith, invited some fun in a time where my life is full of transition and reminded me how much I missed my family.

Aw, this was a really good post. Finding the time and actual effort to produce a very good article?
but what can I say? I procrastinate a whole lot and don't manage to get nearly anything done.

Wow, fantastic blog layout! How long have you been blogging for?
you made blogging look easy. The overall look of your site is wonderful, let alone the content!

Thank you for the encouragement

You really make it appear so easy together with your presentation but I to
find this topic to be really something that I think I would never understand.
It sort of feels too complex and very wide for me. I'm looking forward for
your subsequent put up, I will try to get the grasp of it!

Great work! That is the kind of information that are supposed
to be shared across the net. Shame on the
search engines for not positioning this submit upper!
Come on over and consult with my web site . Thanks =)

I am not sure where you are getting your information,
but great topic. I needs to spend some time learning much more or
understanding more. Thanks for wonderful information I was looking for this
info for my mission.

You're so interesting! I do not suppose I've truly read through a single thing like this before.
So good to discover somebody with some unique thoughts on this
issue. Seriously.. many thanks for starting this up.

This website is something that is required on the web, someone with
some originality!