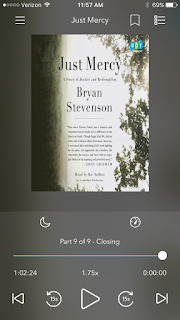 Last summer I attended the Global Leadership Summit and heard Bryan speak. His stories were compelling and heartbreaking. His delivery was spectacular but the pain in what he had seen was evident. Bryan is working in an area that many people would prefer to avoid and not engage. I got home and told my wife to which she replied, "I already read his book."

I've been using the "Overdrive" app to listen to books lately. Since I had listened to Bryan and my wife already read the book I knew I needed to listen to this book. Within the five five minutes I was hooked. I listened to almost half the book on a drive home from Big Bear.

One of the main stories features an ongoing trail about a man name Walter McMillian. I won't spoil the story but he is a man who was surrounded by friends and family but was a victim of racism and poor leadership. Walter was falsely accused and sentenced to death row for a crime he didn't commit. Bryan shares about the difficulty he had in helping Walter also shares numerous other stories. I highly encourage you to read (or listen to) Just Mercy!
Posted by Neal Benson at 10:29 AM